The Dog Who Knew She Was Going To Die 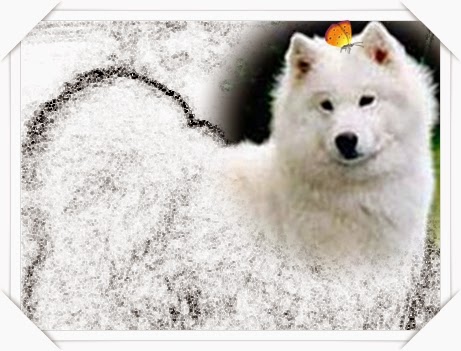 Today's post features several themes I have written about previously: white feathers, butterflies, dog's intuition and signs from those who have passed away.


"A few years ago my mother came to live with me. She was ill and couldn't leave the house. My beautiful Samoyed dog, Diamond, and she became devoted to each other.

In early 2007, Diamond started refusing to go for a walk, which was unusual for her. She would only go into the garden then return to lie near Mum all day.

A few weeks after this began, Mum took a turn for the worse. She died in July of that year.

The next morning Diamond was at the door wanting to go for a walk - something she hadn't done for months. It was as if she'd known that Mum was going to die and wanted to stay with her. When I opened the door, there was a white feather on the step.

I'd read that when a butterfly lands near someone, it's a loved one trying to make contact. When diamond and I reached the garden gate a beautiful red butterfly landed on my dog's head, between her ears, and stayed there for the hour long walk. Diamond didn't mind and it flew away when we reached our gate.

Tears were streaming down my face. I felt sure it was Mum wanting to be close to Diamond and telling her that it was OK now to go for walks.

Over the past few years I've found white feathers in strange places at times that were important dates for Mum."

Other Random Posts:
Miles Of Smiles And The Flap Of A Butterfly's Wing
The Meaning Of White Feathers As Messages From The Dead
The Sixth Sense Of A Dog Who Could Sense Ghosts