The Horror Of Spontaneous Human Combustion 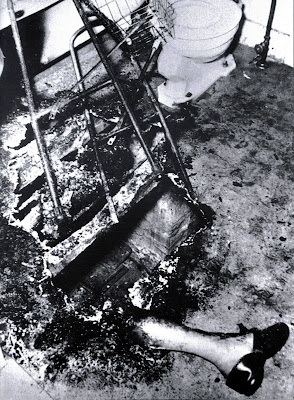 I've just seen a report of a recent case of spontaneous human combustion (SHC). It's up to date and not something dredged from the past. It happened in Ireland and this is what Dr Ciaran McLoughlin, the official coroner investigating the death, said a few days ago:

"The fire was thoroughly investigated and I'm left with the conclusion that this fits into the category of spontaneous human combustion, for which there is no adequate explanation."

Though there are cases of SHC going back hundreds of years, to reach such a decision nowadays is unusual, to say the least

The gentleman who died was 74 year old Michael Faherty and he lived in Ballybane, Galway, Ireland. He was found lying on his back close to a fireplace. A full inquest with forensic experts was carried out.

Mr. Flaherty's body was totally destroyed by fire but there was no trace of anything that would be considered as foul play. Neither was there any trace of accelerants, such as petrol, found.

This is believed to be the first case of spontaneous human combustion found in Ireland and is definitely the first Dr McLoughlin has seen in his 25 year career.

There have, however, been other cases of SHC over the years, such as the case in Gwent Wales in 1980. John Heymer was sent to investigate. This is what is on record of what he witnessed:

"I opened the door and stepped into a steamy sauna-like heat ... orange light emanated from a bare light bulb which was coated in a sticky, orange substance, as was the window ... heat had cracked one of the window panes.

... On the floor, about one metre from the hearth, was a pile of ashes, furthest from the hearth was a partially burnt armchair. Emerging from the ashes were a pair of human feet clothed in socks. The feet were attached to short lengths of lower leg, encased in trouser leg bottoms. The feet and socks were undamaged. Protruding from what was left of the trousers were calcined leg bones which merged into ashes. The ashes were the incinerated remains of a man ..."

Dr Sidney Alford wrote about this Welsh SHC in the New Scientist. He believes he has an answer to this, and other, instances of spontaneous human combustion:

"Anaerobic fermentation within the gut ... produces sometimes prodigious quantities of inflammable gas: consumption of eggs, for example, which are especially rich in phospholipids, might well add to the normal methane and hydrogen significant amounts of phosphine, and, worse, phosphorous dihydride, thereby imparting to the gas the property of spontaneous inflammability - the dreaded phosphinic fart."

In other words the 'right' combination of body chemistry might cause spontaneous burning.

As usual there are other explanations for SHC. Some say it could be down to the Manipura chakra, located in the solar plexus area. For some unknown reason this gets out of control and over-heats, thus causing the combustion. Some yoga adepts can stimulate this chakra to generate heat - I wrote about this practice of tummo or tumo in my post Tummo: The Yogi Power Of Warming The Body.

In 1975 Livingston Gearhart suggested SHCs happened when there were peaks in the Earth's magnetism. This high geomagnetism might cause a form of ball lightning, which in turn can generate radio waves similar to those used in microwave ovens. This could then be the reason why some spontaneous human combustion victims appear to have burnt from the inside outwards.

Yet another theory, from researchers Vincent H Gaddis and Ivan T Sanderson, includes an outline of events leading up to SHC. This begins with loneliness, illness, or some similar negative emotion. This can effect a person's metabolism in a way that phosphagens build up in the muscle tissue. Electricity then generated by things such as intense sunspots, magnetic storms or geological activity may trigger the combustion.

All well and good, but none of this can definitely explain why Michael Faherty died. Spontaneous Human Combustion remains an unsolved mystery.

Photo: An example of spontaneous human combustion: showing the remains of Dr John Bentley who died on December 5th 1966.