Tummo: The Yogi Power Of Warming The Body 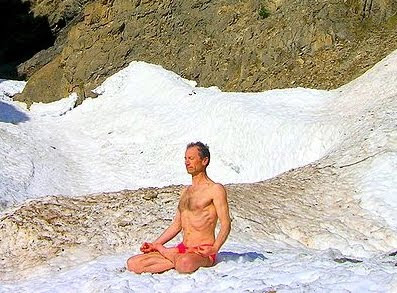 Alexandra David-Neel wrote in the 1920s, "To spend the winter in a cave amidst the snows, at an altitude that varies between 11,000 and 18,000 feet, clad in a thin garment or even naked, and escape freezing, is a somewhat difficult achievement."

I'd say calling it 'somewhat difficult' is playing it down slightly! What David-Neel was referring to is the Tibetan Buddhist Yogis 'Art of Warming Oneself Without Fire Up In The Snows.'

This warming process is known as tummo or tumo. David-Neel explains:

"The word tummo signifies heat, warmth, but is not used in the Tibetan language to express ordinary heat or warmth. It is a mystical terminology.

It is kept secret by the lamas who teach it, and they do not fail to declare that information gathered by hearsay or reading is without any practical result if one has not been personally taught and trained by a master who is himself an adept.

Sometimes, a kind of examination concludes the training of the tummo students.

Upon a frosty winter night, those who think themselves capable of victoriously enduring the test are led to the shore or a river or lake. If all of the streams are frozen a hole is made in the ice. A moonlight night with a hard wind blowing is usually chosen.

The neophytes sit on the ground, cross legged and naked. Sheets are dipped in the icy water, each man wraps himself in one of them and must dry it on his body. As soon as the sheet has become dry, it is again dipped in the water and placed on the novice's body to be dried as before. This operation goes on until daybreak.

It is said some dry as many as forty sheets in one night.

It is difficult to get a perfectly correct idea about the extent of the results obtained through tummo training, but these feats are genuine. Hermits really do live naked, or wearing one single thin garment during the whole winter in the high regions I have mentioned. It has been said that some members of the Mount Everest expedition had an occasional glimpse of these naked anchorites.

Some take such claims with a pinch of salt but I believe they are perfectly possible, we are only scratching the surface of our capabilities which stem from the mind.

In the 1980s a group of scientists from Harvard Medical School, led by Dr.Herbert Benson, went to check out three Tibetan Buddhist monks.

The scientists attached temperature sensors to the monks' bodies. They found that after meditation the temperature of the monks' fingers and toes rose by as much as 15 degrees Fahrenheit. Their internal temperatures remained normal.

Dr.Benson feels that, following meditation, the monks are able to dilate the blood vessels in the skin. This increases the blood flow, which in turn raises the surface temperature. This is actually the opposite of what normally happens. Following extreme cold the normal body response is to constrict blood vessels and thus lower the temperature of the extremities.

The likes of tummo indicate what might be possible with the power of the mind. Problem is, most of us would prefer to be slumped in front of the television with the central heating on high - but what if we tried to train out minds instead ... the possibilities are mind boggling.