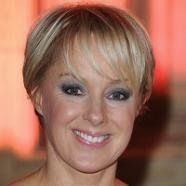 Sometimes it's not so nice when real life imitates what we see on our television screens - and this was the case for actress Sally Whittaker.

Sally is well known in the UK for her role as Sally Webster in the popular peak time soap Coronation Street. She was pleased - if that is the right word - when she found out that she had a strong and important storyline coming up. Her character was to have breast cancer.

Sally had played out her first scenes for Coronation Street, where her character learned that she was suffering from the disease. In real life her own consultant then told her that she too had breast cancer.

She fainted in shock and afterwards asked the consultant to repeat the diagnosis. She thought that maybe he was getting her character in the soap muddled up with her.

Her life was imitating art and, at first, she, "... found the coincidence almost too much too bear."

This all happened back in October of last year and Sally is sure that if she hadn't have been researching breast cancer, for her role, she would have ignored her own sign that something may be wrong. She recalls, "It was so close to my chest bone I thought, no, it’s absolutely nothing. The idea it might be cancer left my head as soon as it entered it."

After seeing her Coronation Street scripts, however, she remembered her her own 'lump'. She said, "I reached for this little thing by my chest bone. It didn’t feel like I had imagined a lump to feel. It felt like a flat disc about one centimetre long and was not on the fleshy part of the breast."

Coincidentally when she eventually went to see a hospital consultant it happened to be the same one who was advising the Coronation Street's scriptwriting team about Sally's on screen illness.

The real life Sally had to have a lumpectomy and chemotherapy and she shaved her head prior to the treatment.

The good news is that Sally Whittaker, plus wig, is now back filming her part as the other Sally for Coronation Street. These scenes will be shown in July.

Sally also offered some advice: "Any woman, who's got anything that you are slightly worried about, go and get it checked out - because I never thought this would happen to me."

Email ThisBlogThis!Share to TwitterShare to FacebookShare to Pinterest
Labels: Celebrity Coincidences, Coincidences in the Media