Married Couple In The Same Photo As Children

Here's a photo coincidence on the lines of the post I published called Photo Taken Of Father Showed His Missing Daughter. I came across this new one by chance on a video from WXII 12 TV . The odds against this coincidence happening must be millions to 1. 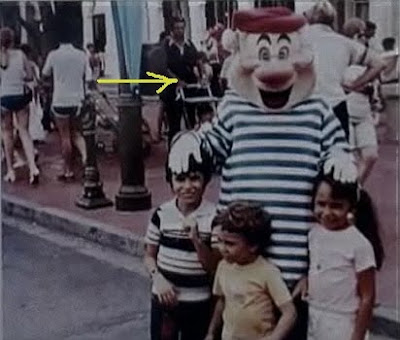 Young newly weds Alex and Donna Voutsinas were looking through some of Donna's old photos from when she was a child and came across one of her at Disney World. Nothing too unusual about this, you may say.

Donna is at the front of the photo, see above, with one of the Disney characters and then Alex spotted something - his dad!

Yes, it's his dad in the background of the photo pushing a stroller (pushchair) and, of course, in the stroller is Alex.

A remarkable coincidence because the families didn't know each other back then and, to make it even more remarkable, at the time of the photo Alex lived in Canada and Donna in Florida.

It looks like their lives touched upon each other when they were young ready for the big romance in later years. Fate? Kismet? Who knows.

Another amazing new similar story (2014):
Married Couple Were Unknowingly Photographed Together As Children