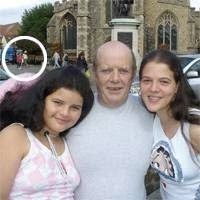 Michael Dick hadn't seen his daughter, Lisa, for over 10 years. This was since he had seperated from his first wife.

Determined to make contact with her again Michael travelled to Sudbury, where she was last known to be living, together with his two other daughters.

His search in Sudbury reached a dead end so he wondered if the local newspaper could help. He contacted the Suffolk Free Press and they photographed him and published an appeal in the next edition of their paper.

As luck would have it, Lisa spotted the photo and article a few days later and contacted Michael. So a happy ending, but there is also a bizarre touch to this story.

When Lisa looked at the photo that was in the newspaper she saw herself in the picture as well! Photo top right, Lisa is circled. Photo source: Suffolk Free Press.

Lisa said of the coincidence, "I was just completely shocked. Me and my mum had been standing in that exact place where the picture was taken about a minute earlier, and you can see us in the picture walking away. It is incredible."

A further bizarre coincidence is that a few days earlier Lisa had talked to friends about finding her father. She remarked, "It is very strange, perhaps it was fate."

On seeing the photo and article Lisa phoned her father, "He didn't believe it was me at first, he thought it was a hoax. But he soon realised it was me and said he loved me and had missed me."

Michael drove straight away to Sudbury, following the phone call, to meet up with her and also his three grandchildren.

Lisa added, "He's promised to keep in touch. I don't think it will be 10 years before we see each other again."