The Bird Angel Who Comforts As Someone Dies 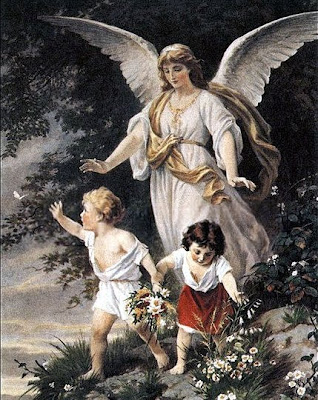 I have written previously about White Feathers (links below) and how they have brought comfort to my wife and I when we lost our daughter, my mother and my best friend of over 30 years in a short period of time.

Today I was reading about Lorna Byrne who claims to see angels on a regular basis and also says that we all have a Guardian Angel with us, regardless of whether we believe this or not. To go along with this it's interesting that - in a survey published last week - a third of Britons are convinced they have a Guardian Angel who watches over them.

Lorna has written that there is an angel who can bring us comfort when someone dies. She saw such an angel when her husband moved on, which she calls the Bird Angel. This is how she describes him:

"As the angel walked towards me he opened up his enormous wings and moved them gently. I could see each individual feather, some huge, some tiny - all white with a tint of gold. I knew this was the comforting Bird Angel I had last seen shortly before my husband Joe's death a few months earlier. I knew he'd come to help me ."

She gives a further description of this particular Bird Angel, "Tall and elegant, he had a human appearance. He was radiant, his face gold in colour and his eyes gleamed with a pearly light ... He was surrounded by golden birds in flight and on the ground all around him were all kinds of other smaller birds - crows, jackdaws, robins, sparrows and finches."

I have to admit that I have never seen an angel but sometimes, almost out of instinct, I do say 'thank you' to something that seems to be looking down on me when things have turned out well. I always imagine this as a smiling face.

In Lorna's case she describes how her husband's Guardian Angel, "... moved through Joe's body and was holding his soul."

I know some readers will be very sceptical about this, especially as Lorna has written a book Stairways to Heaven

on the subject and says that the angels told her to write such books. But what we all believe is up to the individual.

Lorna tells of how the angels helped a young man called Conor who was described as brain damaged and doctors had said he would remain this way for the rest of his life.

Lorna spoke to Conor and then saw six healing angels surround him.

To cut a longish story short, a year later Conor was still in a wheelchair but was now able to move his arms and his head. When Lorna last saw him, "He was walking down the street, laughing, hand in hand with a girl."

All I can say for certain myself is that I do see meaningful white feathers at times (and also black ones as a warning) and I do feel that sometimes it's as if someone is looking after me. This could be imagination, a prop to hang on to or whatever. But, at times, it's necessary to believe in things that don't at first seem possible - they may well just be true. I don't think we should ever write off the impossible.

is also available from Amazon UK.