USS Triton (SSRN/SSN-586), a United States Navy nuclear submarine, was the first vessel to execute a submerged circumnavigation of the Earth  - Operation Sandblast - doing so in early 1960, under the command of Captain Edward L. "Ned" Beach, Jr.

There is a coincidence attached to the circumnavigation.

As the submarine was making it's submerged journey it raised periscope in the Philippines' Magellan Bay. On doing so Captain Beach found himself staring into the eyes of a startled fisherman in a canoe!

For a long time, in the 1960s, it was wondered, "Who was the fisherman?" The National Geographic Magazine actually managed to trace him on Mactan island off Cebu. He was, at the time, a 19 year old called Rufino Baring.

Rufino told of how he was terrified when the eye of the huge nuclear submarine unexpectedly broke water and then vanished. He said, "I was tired and thought I was seeing things. But when it came back a second time, I thought it was part of a very big monster and I was frightened. I tried to get away as fast as I could because it started to move very fast."

Rufino paddled frantically for home but didn't tell his family about what he had seen.

The incident was described by Captain Beach in his log: 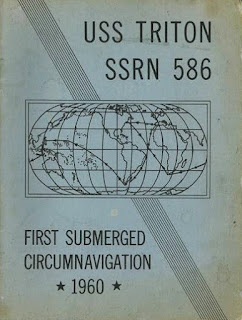 "Upon raising the periscope. I am looking right into the eyes of a young man in a small canoe, close alongside. Perhaps he has detected the dark bulk of our hull in the relatively clear waters of the bay ...

A few seconds later I motion for the scope to be raised once more. Sure enough there is our friend, impassively leaning on his gunwales and staring right at the periscope as it rises barely two inches out of the water.

It's a ludicrous situation: On the one hand an impassive Asian, staring with curious concentration at an unusual object in the water; on the other a US Navy Officer, equipped with all the technical devices money can procure, looking back with equally studied concentration. On one end of the periscope, an outrigger canoe propelled by the brawny arms of its builder; on the other end a $100,000,000 submarine, the newest, biggest, most powerful in the world, on a history-making cruise.

What an abyss - what centuries of scientific development lie between him and me!"
When Rufino was eventually traced he thought he must have committed some sort of crime and was very relieved to be told otherwise.

He was unaware that his photo had been taken through Triton's periscope. When he was told that he was the only person who saw Triton on it's voyage, the information was greeted simply with an embarrassed smile.

And now for an uncanny coincidence about this story.

In making the voyage, in early 1960, Triton began and ended the circumnavigation from St Peter and St Paul Rocks off Brazil.

Rufino, frightened after his experience, repainted his canoe and added two saints' names to protect it from further meetings with sea monsters. The apostles' names he chose were: St Peter and St Paul!