The Ghost Who Leaves Old Pennies In A Tyre Depot 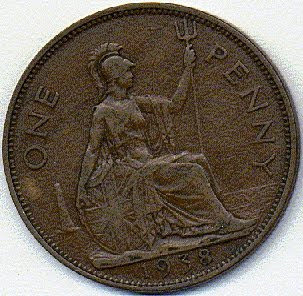 When Nick White bought the building to start up a tyre sales depot he was warned by the previous owner, Nigel Lee, about strange goings on in the property - Mr.Lee even had to call out a clergyman to perform an exorcism.

This didn't put Nick off and for three years all was okay ... but now ghostly things are happening again.

The building does have a history as it was once a chapel (in Doncaster, South Yorkshire, UK) and was also used as a makeshift mortuary in World War II.

Mr.White has now had an uninvited guest, dressed in 1940s clothing, who seems to want to move things around during the night. Tyres end up in different places and the 'ghost' has thrown stones and coins at staff.

One of the strangest incidents is that Nick has started finding penny coins, dated 1936 and 1938, that's from when George VI was on the British throne. Twice the coins have been found in identical places when he has opened up in the mornings.

Mr.White said, "I took all the strange stories with a big pinch of salt when I bought the place. But I wouldn't like to say it's not true any more. There's no logical explanation for the two old pennies turning up like they did - I wish there was. It's a little scary knowing that there's something happening while the place is locked up at night"

Looks like ghosts don't mind where they haunt - even tyre depots.