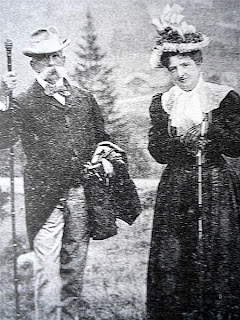 This is one of those historical, classic coincidences, that's been around for a while, but I haven't posted it here previously. I have to be honest and say that I haven't been able to verify if it's all true but, if it is, then it's a definite 'wow'. Anyway, here's my version of the story.

As royalty sometimes does, King Umberto I of Italy, back in 1900, travelled to Monza and, as he was away from his palace, decided to have an evening meal in a smallish restaurant. The date was July 28th.

He was accompanied by his aide-de-camp and there was much excitement in the restaurant. The owner came out to take the King's order personally. This shocked the King, not because the owner was taking his order but because the two of them were like peas in a pod - identical! Same facial looks, build and so on and the King found out there was more - lots more.

The King and the restaurant owner both had the same name, Umberto, and they were both born on March 14, 1844 and in the same town. But it didn't end there.

Their wives were called Margherita and both couples were married on the same day and had a son called Vittorio. The photo shows King Umberto and Queen Margherita.

As we can imagine, the King was knocked out by this doppelganger, so much so that he decided that the following day the owner should visit the royal palace.

The next day arrived, as they often do, and it was the 29th of June 1900. Umberto, the restaurant owner, couldn't however take up his invitation. He had been killed in a shooting accident.

The King was deeply shocked. The very same day an assassin aimed his gun and shot the King through the heart. The final coincidence was, therefore, that they were both killed on the same day.

A lot of coincidences, but things like this really do happen - despite what the cynics may say.