Speaking To My Dead Father 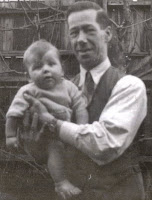 I'm not too sure what to make of this. Last night I was meditating, nothing unusual there, as I often do this - though mostly in the mornings.

My wife had gone up to bed and I just had a feeling that I needed to meditate. I remember checking the clock and telling myself that twenty minutes would suffice.

I followed my usual routine and after about 15 minutes I heard a voice in my left ear. This has never happened previously.

The voice simply said, "Your dad is listening to you."

It was absolutely clear - though I didn't recognise whose voice said those words.

I was still relaxed in my meditation pose so I followed my instinct and spoke softly, telling my dad how I missed him, and my mother, and said a thank you for all they did for me over the years, especially while I was growing up. I also spoke about my son and how he was doing.

I then opened my eyes and that was it.

It was all a strange moment.

I can only think it goes back to the time when my dad died and how, regrettably, I wasn't there. It's something I've always had on my mind, even though he moved on over twenty years ago.

As for the voice I heard, I'm not sure what to believe. Maybe, as it was late at night, I had simply fallen asleep and dreamt it, but I'm pretty sure I didn't.

I'd like to think that dad heard what I said.