Is Afghanistan History Repeating Itself? 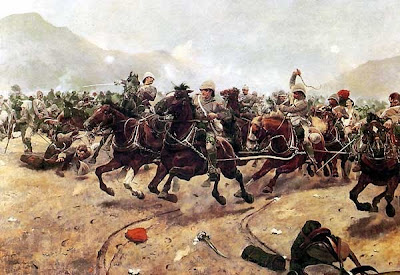 I don't really want to get into the world of politics with this blog but I came across something today which is one of those coincidences where history repeats itself - or at least it could.

I'll say first that I was against the invasion of Iraq and I'm none too happy either with the situation in Afghanistan today. And it's Afghanistan that this post is about.

Being British I can only talk about 'our' involvement and the horror of seeing mostly young soldiers being killed almost daily.

We British have, however, seen all of this previously back in the mid 1800s. This was at the time of the first Anglo-Afghan War. It was a bloody, savage war and an Army Chaplain, the Rev GR Greig, wrote in his memoirs of the humiliation felt when Britain finally pulled out. This is what he said:

"A war begun for no wise purpose, carried on with a strange mixture of rashness and timidity, brought to a close after suffering and disaster, without much glory attached either to the government, which directed, or the great body of troops, which wagered it.

Not one benefit, political or military, has Britain acquired with this war. Our eventual evacuation of the country resembled the retreat of an army defeated."

Much of what the Reverend wrote in 1843 could be applicable today. Most of us aren't too sure of the purpose of troops being in Afghanistan, despite what the politicians tell us. And it does seem to be a possibility that there will eventually have to be a withdrawal, without much being achieved. The Taliban will once more gain control.

So have we learned anything from history? Probably not.

One recent article I read via the BBC News website does make me wonder about Afghanistan. What is this report about? Afghanistan may have more than a trillion dollars worth of untapped mineral deposits, a spokesman for the ministry of mines has suggested.

So Iran has oil, Afghanistan has minerals. But the wars were about Weapons of Mass Destruction (which weren't there) and, er, making the word a safer place - or something like that. All a big coincidence, of course.

Email ThisBlogThis!Share to TwitterShare to FacebookShare to Pinterest
Labels: Coincidences in the Media, History