Precognition Or A Creation 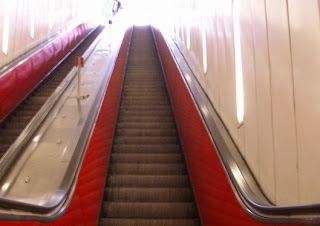 A few posts back I mentioned that I sometimes get glimpses of the future 'in dreams, in meditations and with feelings just out of the blue.'

I'm not sure if the following experience was a glimpse of the immediate future or something else.

My wife and I were in our local town to buy a few things we needed and were both in a happy mood. We headed to a moving escalator to go down a floor and, as we did so, I said to my wife that I knew that a small child in front of us was going to fall.

There was nothing I could do as there were other people in between. The mother dragged the child, who was only about two or three, onto the moving stairs while balancing a pushchair with her other hand. She was with another woman who didn't offer her any help.

I almost sighed in relief as the child remained somehow balanced on a stair as they headed downwards. But towards the bottom the girl suddenly fell forward and screamed out. Luckily the safety mechanism worked and the escalator stopped immediately.

We walked down the stairs and looked towards the woman and her child and I said to my wife, "What a silly woman." Meaning that she wasn't taking care of her child properly on the stairs. It wasn't meant for anyone elses ears.

I know it's something I probably shouldn't have said. The mother's friend heard me and angrily said in a loud threatening voice, "Do you want to say that to my face!"

She then turned to the mother, with the still crying and upset child, and told her that I had said she was a, "Stupid cow." Which, of course, I hadn't. It's not something I would ever say.

It felt like I was suddenly being sucked into an angry, frustrated vortex so I took a deep breath, made no response at all and kept on walking.

We carried on with our shopping and when my wife wanted to buy something for herself I decided to sit on a seat outside.

I tried to send the woman and child kind thoughts. I then began to wonder whether I had actually seen a glimpse of the immediate future or was it my fear of the girl falling which helped create the accident.

It was obvious from their demeanour that the women involved were troubled. I could sense all sorts of resentment and anger about them.

I still can't make up my mind as to the role I played in this whole incident. I shouldn't have said what I did but I felt so annoyed that the little girl had been unnecessarily hurt and felt so sorry for her.

It's strange how we can be drawn into something confrontational, or any other situation, so very easily: a look, the wrong words and so on.

I'm still undecided as to what caused the little girl to have the fall and if I did the right thing in walking away.