A woman has been in the UK newspapers recently because she has an unusual power - metallic objects stick to her body.

This human magnet is Brenda Allison and, as well as metal sticking to her, her body also sets off car alarms, interrupts her television signal and blows light bulbs.

She has had this power, for want of a better word, since she was a child. Even back then her mother was always having to call the television repair man and her watches would simply stop.

Brenda explained, "Metal objects don't fly towards me, but when I put them close to my skin I can feel a pull. They tend to stay on longer when they are near a bone, I don't know why. They can stay on me for up to 45 minutes without me touching them. Sometimes I feel like a fridge covered with magnets."

The magnetic attractions for Brenda are cyclical, being stronger at the end of each menstrual cycle. She says that her body can actually emit a negative or a positive charge. Depending on the time of the month she will actually repel some objects and attract others.

So is Brenda Allison unique? It seems not. In Sofia, Bulgaria a contest was set up to see who could keep metal objects on their bodies the longest. Over 300 people claimed to have this ability and turned up to compete.

There is a documented case where in 1920 thirty-four convicts at New York's Clinton Prison somehow became electrically charged. They were all suffering from food poisoning at the time. Paper stuck to their hands when they tried to throw it away and compass needles swung wildly. 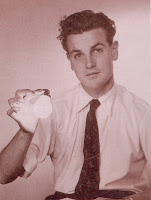 It was only after the illness started to ebb that the effects diminished.

There was also the case of Brian Williams (photo left) from Cardiff, Wales who could light up a lightbulb just by rubbing it with his hands.

There are dozens of examples of electrically charged people like 8 year old Svetlana Glyko (photo below right) who can hold combs, teaspoons and other small objects to her forehead.

Our brains are a magnetic field and we all have a subtle electro-magnetic field flowing through our bodies, though most of us aren't aware of this. Maybe, in the examples mentioned, these people have a stronger charge in their bodies. 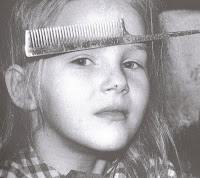 Electricity is also, according to some theories, the cause of poltergeist and such things as human combustion, thoughtographs and even the halos as seen around religious figures.

In May of 1934 there was the case of Italy's Luminous Woman. Signora Anna Monaro became a worldwide sensation. She was an asthma sufferer and when she slept she emitted a blue glow from her breasts. This was described, at the time, as an electrical phenomenon.

Electricity is within us, perhaps if we could learn how to control this we could become empowered in many ways ... but that's perhaps another story.