There May be Alien Life Forms In The Earth's Atmosphere 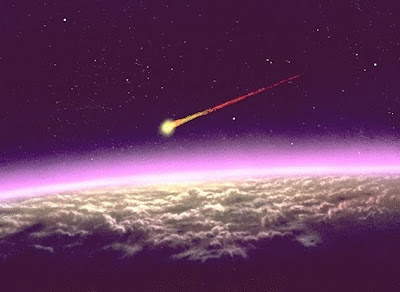 It is generally thought that the first forms of life appeared on earth some 3.8 billion years ago. Many religious traditionalists, of course, may well disagree. But how life started is one of the big debates for mankind.

One theory is that life was brought to earth from somewhere else in the galaxy. Some astrobiologists say that the seeds of life began as microbes carried here, perhaps on an asteroid or comet which then collided with our planet.

Scientists are now about to put this idea to the test. They are about to start a mission to see if any forms of life are surviving on the outer fringes of the earth's atmosphere.

The European Space Agency, along with British scientists, are launching a balloon carrying specialised instruments to search the stratosphere for bacteria and other micro-organisms.

One of the research team, Clara Juanes-Vallejo explained, "There are theories that life on Earth came from space, so we need to know that life can survive the conditions of space for this to be true.

The environment in the stratosphere is very extreme. It can get down to -90 degrees C and is a near vacuum. There is also a lot of harmful radiation as there is not the same level of protection as we get from the atmosphere.

If we know that life can survive in such an extreme environment, then it could also survive in places like Mars or on asteroids.

If we find microorganisms up there, there are a number of ways it could have arrived. It could have come from space itself, or it could be from our own volcanoes that have projected material up there."

It is hoped that microorganisms will be collected and to then establish if these may have arrived from other parts of the galaxy.

All good stuff but it still can't really establish how life began. Okay, it could be proven that life did come to earth originally from somewhere else - but from where? And how did life start in that particular part of the galaxy? From what point did anything start, or maybe there was never a beginning ... we simply exist.

There are so many questions and beliefs. It will be interesting though to hear what the scientists come up with.