The Dangers Of Harry Potter And Wicca To Mankind 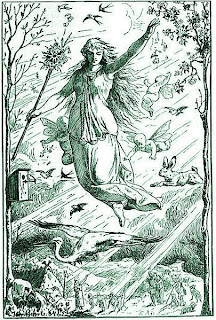 We are in the midst of a great danger, the power of which has been thrust upon this world by the likes of Harry Potter. Mock not, this is serious. Well it is according to the Roman Catholic Church of Great Britain.

The Catholic Church is so worried about the growing number of young people being lured into occult practices, under the influences of Harry Potter and The Sorcerer's Apprentice and various witchcraft films, they have come up with a booklet called Wicca and Witchcraft: Understanding the Dangers

- it's even available on Amazon UK. The author of the publication is Elizabeth Dodd who was a former Oxford Wiccan, but is now okay as she has converted to the Catholic faith.

Yes, but, aren't a lot of the Catholic ways built on Paganism? Many Christian special days just happen to 'coincide' with dates that go back further than Christianity itself. The Romans also liked to claim and adapt Greek Gods as their own.

Dodd says that experimenting with spellcraft is an insult to the Almighty. "The use of magic, the practice of witchcraft, offends God because it is rooted in our sinful and fallen nature. It attempts to usurp God."

Yes, but, hasn't a lot of things done in the name of religion also insulted the Almighty? Surely religion has 'offended God' often. Let's think, what was it that Jesus actually taught: love, turning the other cheek, judge not that you be judged .... now let's think about wars, persecution ...

The author goes on to say that, "... nearly 70% of Wicca practitioners are young women seeking some kind of spirituality. Behind the glamour are grave dangers because of it's link to the occult and the sinister movement championed by satanist Aleister Crowley."

I also came across a website that writes: "The tragedy here is that because Wiccans don’t believe in the devil, they are oblivious to the destructive power that they are actually tapping into. They are unaware that the 'power of nature' that they believe they are summoning for good is actually a clever deception – and that what they are really tapping into is the power of deceiving demons, who appear as light, but ultimately show their true evil dark natures and try to destroy those who have unbeknowingly called upon them." source.

I'm not going to disagree that there can be dangers with dabbling in some forms of what is generally known as the occult, especially if someone has mental problems. You cannot, however, lump all of these forms together.

I think that the Catholic Church is missing a point. We are arriving at a time when the world is looking for spirituality (Dodd admits this herself). They have to ask themselves why people aren't therefore flocking to their churches.

It's interesting that in the last UK census 7000 out of only 31000 neo-pagans identified themselves as Wiccans when asked about religion.

The occult basically means that which is hidden. Within religions there is the diluted version for the masses and another for the 'students'. Jesus spoke to the multitude in parables but unfolded to his disciples the esoteric (hidden) side of his teachings. It's the same for all religions whether this be Egyptian, Buddhism or Judaism the truths are revealed only to the student.

We all follow our chosen spiritual path, some of us may well stray into difficulties, but 'understanding the dangers' of Wicca and Witchcraft won't solve or satisfy our need.

People are become aware of deeper layers to spirituality and life itself. It is this thirst that needs to be quenched.

Further Reading:
Get Keyed Up Said The Witch And Gurdjieff Agrees
The Puritans Diary And The Devil's Women
Bible Coincidences Where God Is At The Centre