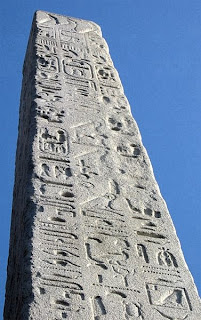 I've mentioned before that I like old books and sometimes buy them at Car Boot sales and Flea-Markets. I was flitting through a recent purchase from the 1930s called How Much Do You Know and a section entitled What Is Cleopatra's Needle.

Having seen the Needle in London I read what it had to say. Seemingly it was given to the British Government in 1819 but wasn't transported to England until 1878. Then I remembered, 'by coincidence', I also had a book of The Penny Illustrated newspaper covering the whole year of ... 1878!

I'm interested in ancient monuments and Cleopatra's Needle, as it is usually known, dates back about 3500 years - so you don't get too much stuff older than that.

There is actually a pair of these obelisks, the other now being in Central Park, New York. These were believed to have been initially set up by Thothmes III (1515-1461 BC) who was named as one of the greatest rulers of ancient Egypt.

The obelisks stood before the great temple of Ra, the Sun God, at Heliopolis, near Cairo. After the death of Cleopatra they were moved to Alexandria, possibly in accordance with her previously expressed wishes. 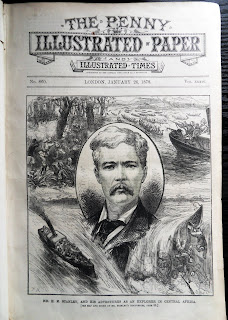 From The Penny Illustrated I found out that the delay of transporting the Needle to England was simply cost - the British Government wouldn't cough up the money required. How it eventually arrived in London is explained in the paper:

'Done', said Dr. Erasmus Wilson, who guaranteed the £10,000 to Mr. Dixon for the safe shipment of the Needle to England. The public is therefore greatly indebted to both these gentlemen for their generous personal sacrifices in the task of bringing home an object of historic and artistic interest, which was already the property of the British Government ..."

The voyage, however, wasn't all plain sailing. The ship they used was called Cleopatra - well I suppose it would have to be. It was to be towed by a steamer, Olga. Below is an illustration of Cleopatra taken from The Penny Illustrated - no photos in papers back then. 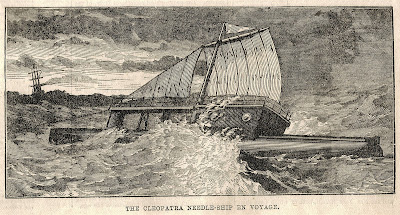 From the Penny Illustrated:

"The crew of the unique ship Cleopatra consisted of eight men and Captain Henry Carter; and she left Alexandria, in tow of the Olga, on Sept. 21, 1877. Safely through the Mediterranean did the Olga tow the Cleopatra; but a gale in the Bay of Biscay, on Sunday, October 14, placed the Cleopatra in such jeopardy that a boat's crew from Olga went to her assistance, and six men were unfortunately drowned.

The little ship was thrown on her side, and, after an anxious night for the men in a perilous position, the Olga next morning took the crew on board, and left the Cleopatra to the tender mercies of any passing mariner.

The steamer Fitzmaurice, bound for Valencia, fell in with the derelict, and towed her into the harbour at Ferrol, whence (duly made sea-fit by Captain Carter and a picked English crew) the Cleopatra started for England, in tow of the Channel steam-tug Anglia, on Tuesday morning, Jan 15.

The Anglia was equal to the occasion. She steamed past Margate at half past four on Sunday afternoon with the 'cylinder ship' in tow, 'all well;' and on Monday reached the haven already mentioned (East India Dock)."

I wonder if the Needle was difficult to transport because it was meant to remain in Egypt, which is surely it's rightful home. Queen Victoria, however, sent them a telegram stating: The Queen is much gratified at hearing of the safe arrival of the Needle'.

The dimensions of Cleopatra's Needle are quoted as being 68ft and 6inches tall and 7ft and 10 inches wide at the base. It is believed that the pyramid shape at the top was once covered with gold.

The Penny Illustrated also, in a later edition of 1878, published a facsimile of the symbols on the Needle - as below. It's not all that clear here but the paper's pages were much larger. 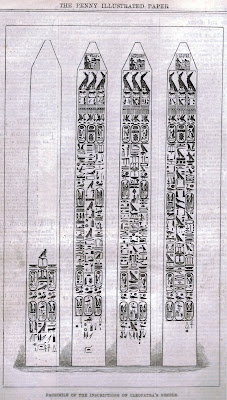 The London Cleopatra's Needle is on the Victoria Embankment of the River Thames, near the Golden Jubilee Bridges.

When the Needle was first erected in 1878 a 'time capsule' was hidden in the front part of the pedestal. This included such things as a box of cigars, tobacco pipes, children's toys, a bronze model of the monument, copies of the Bible in several languages, a set of British coins. 12 photographs of the best looking women of that time plus other bits and pieces.

So that's the tale of London's Cleopatra's Needle.