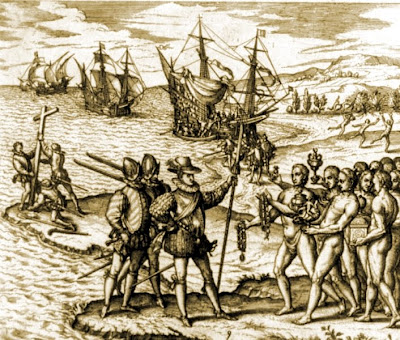 When Christopher Columbus landed on Hispaniola / Haiti he is said to have studied the local people and learnt something of their ways and beliefs. They were gentle by nature. Columbus wrote in his log:

"They ... brought us parrots and balls of cotton and spears and many other things, which they exchanged for the glass beads and hawks' bells. They willingly traded everything they owned... They were well-built, with good bodies and handsome features.... They do not bear arms, and do not know them, for I showed them a sword, they took it by the edge and cut themselves out of ignorance. They have no iron. Their spears are made of cane... They would make fine servants.... With fifty men we could subjugate them all and make them do whatever we want."

These 'natives' or 'Indians' had a religion which has several echoes of Christianity.

They believed in one Supreme Being who lived in the sky and was immortal, omnipotent and invisible. This 'God' had a mother but not a father - thus created without the aid of a male, almost Jesus like.

The Supreme Being wasn't worshipped directly but through messengers or deities known as zemes.

Each family had their own zemi to protect them and this image was placed about their houses or carved into any furnishings. They thought that these zemes presided over every object in nature: some governed the seas and forests, the springs and fountains and so on. This is similar to the early Greeks and Romans who considered that all of nature was presided over by lesser gods.

To the inhabitants Haiti was the earliest part of creation and the sun and moon came out of one of its caverns to give light to the universe. This cavern seemingly still exists near Cape Francois and has a hole in the roof from where the sun and moon sallied forth to take their places in the sky.

From another cavern came the human race. For a long while they had to remain in the cavern during sunlight as the sun would supposedly have otherwise changed them into birds or rodents. Eventually, when they were able to emerge into the outside world from the darkness they had one problem - they were all males!

As they journeyed on the island they came to a small lake and they noticed what they took to be animals. They were in fact women. Once they realised this they tried to catch the women but found them to be as slippery as eels so they couldn't hold on to them. As time past, the men's hands began to roughen with their work and they finally succeeded in capturing four females - and from this the world was peopled.

The natives believed in a soul and that apparitions of the dead could be seen. They believed that the spirits of good men, after they died, would be reunited with their loved ones and their ancestors. As spirits they would live, not in a Heaven, but on a beautiful part of the island.

This is how Columbus understood the natives ways to be - and this enabled him to take advantage of them. As already quoted as per his log: With fifty men we could subjugate them all and make them do whatever we want ... Christopher Columbus is not quite the hero he is often made out to be.