The Tanah Lot Temple And Its Guardian Giant Snake 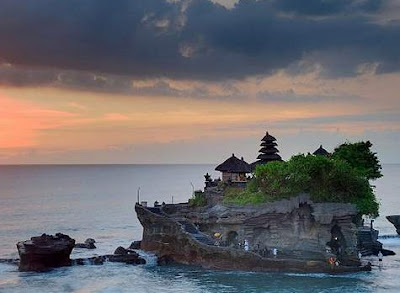 I received a postcard today from Indonesia which features the Tanah Lot Temple or Pura Tanah Lot, as it is sometimes called. The sender obviously knows of my liking for churches, temples and so on.

This temple in Bali is set on a rock formation which, over the years, has become an island, though accessible from the shoreline. It has a long history, with a story attached to the making of the temple.

Tanah Lot Temple is said to be the work of a 15th century priest called Nirartha. While on his travels along Bali's south coast he found this beautiful spot and rested there for the night. Local fishermen saw him and he instructed them to build a holy place where the Balinese Sea Gods could be worshipped.

The island has it's own guardians in the shape of tame black and white snakes, said to be deities.

At the base of the island, however, there are supposedly poisonous sea snakes to keep away evil spirits and unwanted intruders. Also on guard is a mythological giant snake which is said to have been created from Nirartha's scarf.

The temple is one of seven sea temples situated along the coast, all within sight of the shore.

Though the Tanah Lot Temple looks magnificent I understand it is a bit of a tourist trap, with souvenir shops and restaurants on the approach to the island.

Postcards are always nice to receive but it always makes me want to visit the places shown if, that is, I haven't already visited the area. So I now have itchy feet wanting to lead me to the temple.

The postcard arrived (of course!) on the morning my wife and I were talking about how it had been a while since we had heard from the postcard's sender. There's usually a coincidence in the mix somewhere.