The Mystery Of The Enfield Poltergeist 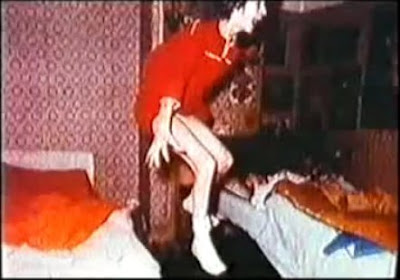 Like something from the movie The Exorcist the rough voice of a man erupts from an eleven year old girl's mouth, "Just before I died, I went blind, and then had a hemorrhage and I fell asleep and died in the chair in the corner downstairs."

These words came from the lips of Janet Hodgson then of 284 Green Street, Enfield, England in one of the most famous, though controversial, cases of poltergeist behaviour. It has since become known as the Enfield Poltergeist.

Janet, then eleven, lived with her mother Margaret (known as Peggy) and two siblings Johnny ten and Billy seven. The problems began in August of 1977 after the children admit to having used an Ouija board.

After hearing a noise Peggy went up to see her children, who were in bed, and witnessed a chest of drawers move by itself. Janet has told of what her mother saw:

"It started in a back bedroom, the chest of drawers moved, and you could hear shuffling. Mum said, 'I want you to pack it in.' We told her what was going on, and she came and saw it for herself. She saw the chest moving. When she tried to push it back, she couldn't."

In the days following there were noises, bangs on the walls, levitation, graffiti, flying objects and other happenings of poltergeist activity.

But before we write this all off as a hoax, it has never been disproved, so much so the Enfield Poltergeist is now being made into a film to be released on next Halloween's Day.

Here is some of the 'proof' for the Enfield Poltergeist.

(1) A policewoman, WPC Carolyn Heeps, sent to the scene has signed an affidavit saying she had seen a large 4ft armchair move unassisted across the floor. She afterwards examined the furniture to make sure there were no wires etc. to pull the chair. To the policewomen it seemed genuine.

(2) Regarding the 'rough man's voice' I mentioned at the beginning of this post he later said his name was Bill Wilkins. Bill's son came forward to confirm how and where his father had died.

(3) The next door neighbour, Vic Nottingham, was called in by Margaret, when the poltergeist activity first started. He said of this, "I went in there and I couldn't make out these noises - there was a knocking on the wall, in the bedroom, on the ceiling. I was beginning to get a bit frightened."

(4) The Daily Mirror visited the scene and photographer, Graham Morris says, "It was chaos, things started flying around, people were screaming."

(5) Investigators from the Society of Psychical Research were sourced. These came in the form of Martin Grosse and Guy Lyon Playfiar. Grosse has since died but at the time said, "As soon as I got there I realised that the case was real. Everybody was in chaos.

When I first got there, nothing happened for a while. Then I experienced Lego pieces flying across the room, and marbles, and the extraordinary thing was, when you picked them up they were hot."

....oOo....
All the while the activity seems to have been centred on eleven year old Janet. She is now 45 and told Channel 4 television:

"I felt used by a force that nobody understands. I really don't like to think about it too much, I'm not sure the poltergeist was evil. It was almost as if he wanted to be part of our family."

Janet told the Daily Mail, when asked about what she experienced:

"I knew when the voices were happening, of course, it felt like something was behind me all of the time. They did all sorts of tests, filling my mouth with water and so on, but the voices still came out.

The levitation was scary, because you don't know where you were going to land. I remember a curtain being wound around my neck, I was screaming and I thought I was going to die."

Janet had a short spell in the Maudsley Psychiatric Hospital but all of her tests found that she was normal.

The mystery of the Enfield Poltergeist will continue, especially as it is being resurrected by a movie to be released in October 2012.

The video is a very short teaser for the movie.

This House is Haunted: The Amazing Inside Story of the Enfield Poltergeist