White Feathers After Someone Dies 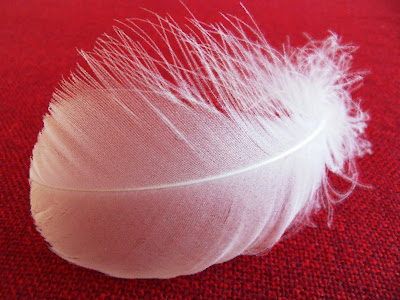 On Wednesday I wrote about white feathers again in my post White Feathers As Contact With The Dead. As I have said previously I get more emails and the like about this subject than anything else I write about.

Below is a story I received following the mentioned post, the lady concerned wishes to remain anonymous.


"I heard about white feathers from a friend who had lost her Grandma. I thought it was nice that she believed they were a sign from the person who had passed away but I also thought, 'yeah right...'

Then I lost my Mum, I was devastated, she had been ill but we had been assured she was on the mend and I was thousands of miles away on holiday when she died. The guilt and pain were so incredibly hard to bear.

The first of my white feathers floated to the ground in front of my eyes one afternoon, not long after my mum died. It was a very still winter's afternoon and I was sitting in my garden talking to my husband about my Mum.

The second was on the floor just outside my back door.

The first white feather took my breath away, the second I looked at still in denial but starting to think maybe....

For two and a half years after this I still found the feathers every time I walked my dog regardless of the season, the weather, the time of day. I am in no doubt it was my mum saying its okay.

A few weeks ago I was packing to go on holiday. I had spent a sleepless night worrying about my eldest daughter who had gone to work abroad and seemed to be in with a bad crowd. God knows how she was surviving, and my youngest who I was leaving on her own for the first time.

I got up early to finish packing and there in the mesh inside my case was a perfect white feather. No way was it there the night before, the windows had been closed - it was inside the mesh.

It was my Mum telling me everything would be okay. I am sure of this. Suddenly I felt good again.

And funnily enough my youngest was fine while I was on holiday and my eldest is holding down a job, making her way, and earning enough money to live on - not sure what else she is up to - not sure I want to!

I find fewer white feathers now, but every so often there one is. And now I smile when I find one and say - 'Thanks Mum' x"