Lindos Halts A Whirlpool Of Negativity 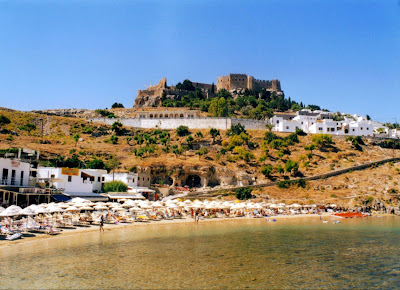 The problem with having had a recent medical procedure is that well meaning people ask how you are - which is fine - but then go on to explain in great detail other people's health problems or maybe their own as well.

I have a sympathetic nature but these sort of conversations can bring you down and, before you know where you are, you are captured in a whirlpool of negativity. Okay, a bit over the top, but it's surprising how much general chat is negative, and this doesn't do anyone any good.

So I decided to counteract this with some positivity. I made a list of some of the things I want to do. At the top was 'attending my grandson's university graduation'.  As he's only two, I'm thinking long term!

I also got out my old photos, thinking about good times I've had and places I've been. I have previously written a post about this: Photos Which Act As A Pick-Me-Up.

It's surprising how such simple steps can give you a boost. It's no good just wallowing in that whirlpool I mentioned!

I've been on lots of holidays and travels over the years but one always stands out is Lindos on the Greek Island of Rhodes. I can't fully describe why, it was probably simply the right place at the right time.

It wasn't an expensive holiday and Karin and I didn't do much while there - none of our usual sight seeing trips, in fact we didn't even bother with a hire car.

We stayed in a converted fisherman's cottage at the back of the village, high up on the hill where Lindos is situated. Well it was described as a 'cottage' but was really just one large room and a bathroom that was built into the rocks on the hillside. Outside was a garden with a table and chairs - and what more do you really want when you have sunshine, views, fresh fruit and red wine?

We would meander down to the beach in the morning for a swim and spend some time in the sunshine and then stroll back through the village for some lunch. At night we'd walk around the small houses and narrow streets, saying hello to the old widows dressed in black, and maybe have a glass or two of wine in a small bar.

As the author of Zorba the Greek, Nikos Kazantzakis wrote:

There's lots of history in Lindos, at the very top of the hill for instance, is the Acropolis, first built about 200BC with wonderful views. 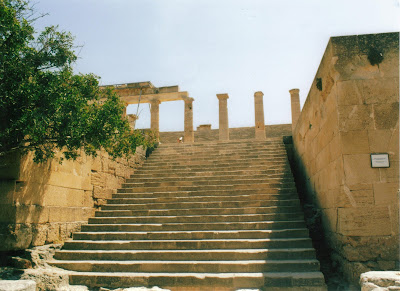 But, really, it doesn't matter where we are in the world. Whether we are sipping a beer in our own small garden or on a luxury yacht in Monte Carlo it's up to us to decide if we want to be happy - it's an attitude of mind.

A nearby neighbour saw me walking with Karin today and told me that he had also seen me yesterday and how white and pale I looked. "But today, you are looking so much better," he said, "and must therefore be feeling better as well." I wasn't going to disagree with him!

As I've often written there is no reality just our realisation of how things are.