The Coincidence Of The Purple Car At Woodstock 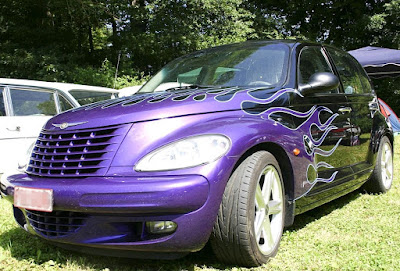 A 67 Not Out reader's coincidence story today, which may also have a touch of telepathy involved. My thanks to Megan T. for sending this to me - appreciated.


Your site inspired me to start writing down some strange coincidences that have happened to me in the past. This one is the oddest/creepiest/coolest:

Just some background, I grew up in Kingston, NY which is about 90 miles from NYC (just for perspective) and about 10 miles from Woodstock, NY.

One afternoon about 11 years ago, a friend and I drove to Woodstock so I could buy my mom a mothers day gift. When we were done, we had nothing to do so decided on a whim to go on a nice drive near the reservoir, which was about 20 miles down the road and in the opposite direction of Kingston.

When we got there, we drove around for a bit then decided on yet another whim to go exploring in the hills behind the reservoir. We drove and drove and at one point, I looked in the rear-view mirror and thought I saw a purple car way behind us. I thought, "That's weird ... the only person I know with a purple car is Ryan," then dismissed it and kept driving and chatting with my friend.

Several minutes later a purple car went flying past us in the opposite direction. This time I could clearly see that the driver was in fact my brother Ryan, and my other brother Seth in the passenger seat. He saw me too and turned around. We stopped on the side of the road to say hi and how weird it was that we'd run into each other in such a remote, obscure place.

When I asked what they were doing way the hell out here, they said they had just left Woodstock, they were there buying mom a mothers day gift at XYZ shop (I forget the name, blame it on aging lol) and when they were done, decided randomly to go for a drive back here.

Turns out I bought mom's gift at XYZ and my brothers were in the same shop minutes after I left.

Other Random Posts:
Photo Taken Of Father Showed His Missing Daughter
Where And When Did Language Begin?
Impossible Pie: A Way Of Life And Death