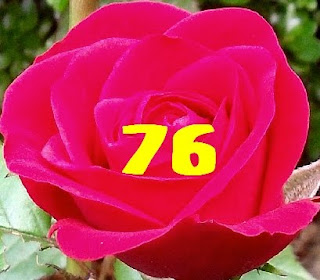 Coincidences seem to arrive in various categories. The sort I'm mentioning today is where numbers, or perhaps a symbol, keep popping up throughout a lifetime.

With me it's the number 76. This has appeared from time to time ever since I can remember.

As I see it 76 comes about in two categories.

Firstly it seems to be a sign for me of something good or perhaps to indicate that I'm on the right track.

Now it's easy to say that this happens all by chance or, perhaps, I've picked numbers or circumstances to fit this post. I can understand this thinking but for me when the number 76 comes up, in some way, it means something good will happen. And, yes, you could also say that if you believe something to be true then it will be.

There are many examples I could offer. For example in the early 70's I owned a car with the number plate 76GMP. Now my initials are MP and a girlfriend I had back then used to say the GMP meant 'gorgeous Michael Perry' - blimey how times have changed, those were the days!

Anyway, the 76, even back then, I felt was lucky and the car was lucky in more ways than one, which I won't go into!

The strange thing is that later, when I married, I moved into a house, as I mentioned earlier, numbered 76 and the road I lived in started with a G - and me, MP, lived there. So the 76GMP all fits nicely into place.

I know this may sound like I'm away with the fairies, and it's often possible to make things fit the way you want. All I can say is that I 'feel' that 76 is an important symbol of good in my life. And I believe that lots of people have special numbers or symbols.

Having written the above I had a look on Google for a meaning of 76, I had never done this before. All I could come up with was a website called Riding the Beast which gave the following:

"76: Represents the termination of the individual Karma, 6, by the completion of its cycle of evolution, 70, passing from the death of the matter - or of oneself - to the birth to the spiritual, that is to say the passage on a higher level of existence - 7 + 6 = 13."

Whatever! All I know is that 76 is a positive symbol in my life.

Do you have a special number or symbol in your life?