Not sure what you'll think about this one, or even if it's really about coincidences. It's something I read about in the Daily Mail yesterday and I have to admit I am a little sceptical about it all.

The story, in my own words, is about the EuroLottery winner, George Sturt, who won £26 million (about US$42 million).

75 year old George reckons that his late wife, Maureen, is watching over him and is also helping him financially. It started out with small amounts. On Saturday 9th January he won £22 ($35) on the lottery, this was followed by £52 ($84) on Wednesday 13th and then finally on Friday the 15th of January came his massive £26m jackpot win.

Maureen died six months ago and George describes her as being a 'bit psychic.' As a matter of habit, when she was alive, he always touched her wrist at night and said, "Goodnight darling." 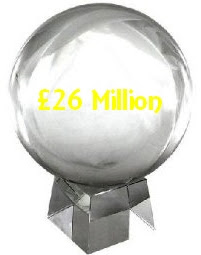 George said that since she died a crystal ball, she had placed by the bedroom window, had 'sparkled' every night as he repeated the same words.

On the Saturday night, following the win, he said the same words as usual and also added a big 'thank you' to his wife for her help. At this moment, according to George, the crystal ball 'danced with light.'

So was George's wife really helping him from beyond the grave? Or did the crystal ball simply sparkle and dance with light because of reflections from an outside source - perhaps a car going by or a myriad of other things?

Also on the winning money theme: 41 year old hairdresser Susan Herdman predicted on her Facebook page that she would win the lottery. This was after she had been for a tarot card reading. Two weeks later, on Saturday 16th January, Susan won £1,182,714 on the UK National Lottery.