Kundalini The Serpent Of Adam And Eve 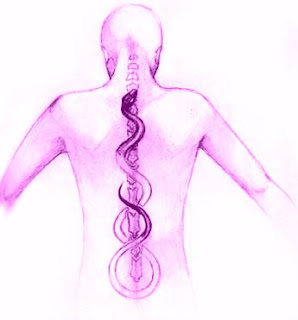 You could say I'm a bit off track today, nothing to do with coincidences, but it suddenly dawned on me that the serpent in the religious Adam and Eve story could well be Kundalini. So I thought I'd jot down a few random thoughts.

Kundalini is known in yoga as the latent power, traditionally said to be coiled three and a half times in the form of a serpent, dormant in the Muladhara Chakra.

Once aroused or awakened the serpent can rise up the spine from this dormant position, through the other chakras via a channel known as chitrini. This leads to knowledge / power / life force / intuition.

How we then go on and interpret this further is something to ponder. Perhaps Adam and Eve are simply female and male energies combining through the serpent (Kundalini) with the Tree of Life being the spinal chord.

Or maybe Eve awakened her own Kundalini serpent power and this in turn awakened her to knowledge - the 'tree of knowledge of good and evil' mentioned in Genesis 2:17. She then showed Adam the way to knowledge. Their nakedness of each other, which they then saw, might not have been their physical bodies but each others thoughts and desires.

There are also sexual connotations regarding Kundalini which I won't go into here.

Sufficient to say that because Eve tempted Adam sex has led to the troubles of man (and woman) ever since. Though it can be used for spirituality.

No doubt I'll come back to Kundalini and Adam and Eve in the future, when I've done some research.
Posted by Mike Perry at 14:25

Email ThisBlogThis!Share to TwitterShare to FacebookShare to Pinterest
Labels: Religions