You Never Know Who You Might Meet In a Bus Queue

Back to the world of coincidences today. A story passed on to me about an unlikely meeting. Fancy being in a bus queue, thousands of miles from home, and finding out that the person you were talking too knew not only your home town but your house as well. 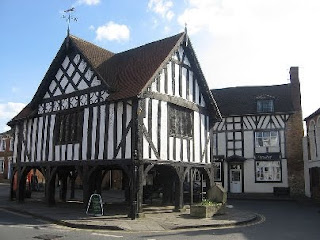 My brother and I, we are from England, were travelling in Mexico, Belize and Guatemala last summer. We were getting on a bus to go to an island in Belize and were waiting with a group of people. We got chatting to an English girl and then got on the bus with her.

Later on when we came to a bus stop we had to change buses. She was going to find a hostel to stay in the town so we said goodbye.

About an hour later she returned having decided to go on into Belize, and asked if she could travel with us. We said yes and subsequently spent three days travelling with her.

Her name was Vanessa and it was only about 2 days after we met her that we asked where in England she was from.

She said "Oh I know Gloucester, I used to go to school in Cheltenham." (A town nearby with a famous ladies college).

We told her we lived in a small town called Newent (photo top right). She said she knew it and asked if we knew Elly Cox.

My brother and I were stunned! We know Elly Cox, she lived five doors down from our house. She was also our sister's best friend before she went to boarding school.

How crazy is that? Of all the people we decided to talk to in the bus queue we talked to someone who’d been within about 10 metres of our front door!