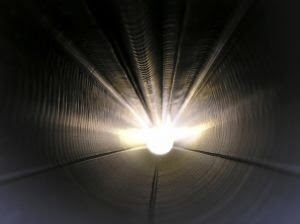 I guess a lot of us have ideas about an afterlife, so this story of Iris Lemov's Near Death Experience (NDE) will hopefully be of interest. It was sufficient to change Iris's whole outlook on life.

Mrs. Lemov was in hospital for an operation - nothing major but something which had to be carried out. Everything appeared to go well until, that is, she was returned to her hospital room. In Iris's words:

"I was brought back to my room after surgery and was speaking to my nurse, when a strange separated feeling between my body and my brain occurred. High above my body I floated wondering why so many doctors were around the bed."

Her heart actually stopped beating, she looked down on her pale face and then everything went black.

The next thing she recalled was being in a black tunnel, there was a light at the end of it - sound familiar? She continued:

Once through the light, "It was a sight to behold. There was velvety green grass and calmness. Music coming from nowhere made me feel comfortable and I began to feel as if I belonged. I saw figures coming towards me who called my name. This man with a white beard told me to go back and said, 'Your family needs you, enjoy your life.' This beautiful man was my grandfather who died two years before I was born."

Iris added, "If we could all have the opportunity of seeing my valley during the course of our lifetime, how much more purposeful our lives would be."

Though Iris Lemov had been technically dead she survived and returned to full health. There does appear to be a right time for life and for death.

There are countless similar stories of Near Death Experiences (NDEs) on record. Many in the medical profession, however, put these down to some sort of psychological, chemical or biological action (see here). The mind or brain, they reckon, simply plays a trick on us - but why would this happen? For what purpose?

I remember reading somewhere of a medical nurse who sometimes saw apparitions at the time prior to her patients dying. She saw figures and in one instance the patient, who was clinging to life, smiled and said that she had just been visited by her dead sister. This tied in exactly with what the nurse had witnessed.

Like so many things about our lives it is up to us to decide what we wish to believe.

Email ThisBlogThis!Share to TwitterShare to FacebookShare to Pinterest
Labels: Mysteries, Near Death Experiences