The Meeting That Led To Her Soul Mate

Another reader's coincidence story today from Evanna and it's certainly an interesting one. I guess it raises the question: Are we linked to certain people and is it part of our destiny to meet up with them? 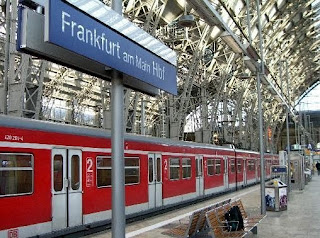 The greatest coincidence that happened to me so far I experienced in February 2002.

I am originally from Austria, and for half a year now I’ve been working in Frankfurt, Germany. On the particular weekend, my boyfriend had come to visit. We were sitting on a train talking to each other, when a girl who had been sitting nearby spoke to us.

She had recognized our Austrian accent and was happy to tell us she originated from the same area as we did. Before we could exchange names, addresses or anything, however, she had to get off the train. As the train left her station, she waved to us and that was the last thing we saw of her. I felt very sorry for having 'lost' her, as it is always great to meet people from home and I would have loved to stay in touch with her.

My boyfriend returned home, I stayed in Frankfurt. About a week later, he told me he had received a strange email. A woman was searching for an old school mate whom she had not seen for years. His name was the same as my boyfriend. The woman wrote that she came from our home area but had moved to Frankfurt some years ago.

Although my boyfriend was not the man she was searching for, he wrote a reply, telling her about his personal connection to Frankfurt. In the correspondence that followed he mentioned the girl we had met on the train. The short encounter had for some reason stayed on our minds. When the reply email came, we were stunned: It had been her whom we had met on the train!

In addition to the small coincidence of the likeness of my boyfriend’s (very common) name and that of the missing school mate, there is the big coincidence of her writing to my boyfriend of all people carrying that name, thus triggering off the 'retrieval' of people who would otherwise hardly have met each other again.

And I’m glad we did. When the girl and I met again, we immediately realized that there was a special, soul mate like relationship between us. She’s become my best friend in a foreign city. I’m starting to feel at home now.

If you have an interesting or unusual coincidence or synchronicity story, and would like us to consider publishing it, please use the Contact Button at the top of the page. Thanks, Mike.
Posted by Mike Perry at 12:18