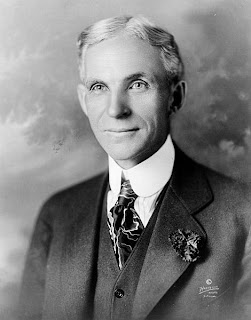 I didn't realise that Henry Ford (July 30, 1863 - April 7, 1947) was a believer in reincarnation, until I came across this interview he gave to the San Francisco Examiner on the 26th of August 1928. He makes some interesting points in favour of the belief:

"I adopted the theory of Reincarnation when I was twenty six.

Religion offered nothing to the point. Even work could not give me complete satisfaction. Work is futile if we cannot utilise the experience we collect in one life in the next.

When I discovered Reincarnation it was as if I had found a universal plan I realised that there was a chance to work out my ideas. Time was no longer limited. I was no longer a slave to the hands of the clock.

Genius is experience. Some seem to think that it is a gift or talent, but it is the fruit of long experience in many lives. Some are older souls than others, and so they know more.

The discovery of Reincarnation put my mind at ease. If you preserve a record of this conversation, write it so that it puts men’s minds at ease. I would like to communicate to others the calmness that the long view of life gives to us."