Something light hearted today. The photo below is from Daniel Green amongst his flickr pics.

This is how he describes the coincidence that brought about this photo.

"I showed up to work today and saw that two of my co-workers, who are both equally far along in their pregnancies, just happened to be wearing the same kind of stretchy shirt, one in blue and the other in pink. They were facing each other talking, and as soon as I saw those identically round bellies, I thought of the dots in Flickr's logo! I explained this and asked them if I could take a photo with my camera-phone. They agreed. They even put their bellies together for me."

The flickr dots he mentions are what often shows up on flickr while waiting for a photo or photos set to load on their website (pic top right). 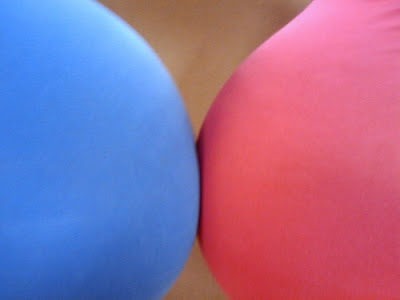