Evil Nightmares And The Number 2 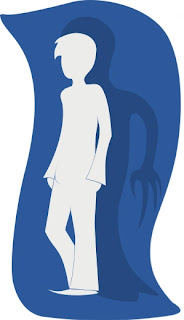 I have been reading recently about people who have, what I would call, nightmares. These are ones which feature a dark or black cloaked figure, usually thought of as being male.

I've read dozens of such cases where this figure is often in the corner of the room or sometimes floats above the person having the 'nightmare'. Most describe the figure as being evil. One woman wrote, "It reeks pure evil and I just know it’s there to hurt or kill me. I have never felt such fear in all my life."

Another woman told of how, "I find myself sitting straight up screaming. Should my husband try to grab my arm or wake me up, it just makes it worse. I have kicked, scratched and hit him. He's a 250 pound man and I only weigh 120 but I have kicked him clear off the bed and onto the floor thinking he was someone trying to attack me."

What made me write about this is because of something I kept reading about the number 2 in associaion with this experience, an example being:

"Also for some reason the number 2 seems to play a prominent role, with some dreams starting with me fixated over the impression that I’m surrounding with a great number of people before that number becomes divided down into two, as in me and the presence."

Why this interests me is because I have only ever had one nightmare in my life. It was as a child of 9 or 10 but is still imprinted in my mind. I 'dreamt' that I was being chased by the number 2. I remember my mother telling me how I was standing up in my bed pointing to the corner of the room where I was insistent that a number 2 was coming to get me. To this day, I remember how terrified I was of that number 2.

Fortunately I have nothing against the number 2 today!

It's fascinating though, how many people have dreams / nightmares / night terrors about the evil dark figures and how sometimes a number 2 is involved.