Holy Man Hasn't Had Food Or Drink For 70 Years 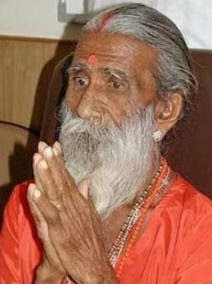 82 year old Prahlad Jani claims that he hasn't eaten or had any form of drink for nearly 70 years. So is this another Yogi trickster or could there just be an element of truth within his story?

Though he hasn't devoured any food Prahlad Jani said, "I walk 100 or 200 kilometres in the jungle, I never sweat and don’t feel tired or sleepy. I can meditate for three, eight or 12 hours — or even months."

Before we completely write this off, the gentleman has recently been submitted to medical tests and has been under supervision in an Indian hospital in Gujarat. For 15 days he was watched and observed around the clock and the claim is that he consumed no food or water. The lack of water should have been sufficient to cause him ill health, to say the least.

What is his secret? The Hindu Holy Man says, "I am strong and healthy, because it is the way God wants me to be."

It seems that Prahlad Jani underwent a spiritual experience when he was 11 years old and became a follower of the Godess Amba. In return the Goddess provides him with a life giving, invisible elixir.

A Dr Shah and biologist Dr Ilavashagn, director of the Defence Institute of Physiology and Allied Sciences (DIPAS), a funded department of the Defence Research and Development Organisation have reported that, after apparently living on thin air for two weeks, the holy man was more healthy than someone half his age.

The doctors went on to say, "What is truly astonishing, and something we have no explanation for, is that he has not passed stools or urine. To our knowledge, that is medically unprecedented." Well I guess if he hadn't eaten or drunk anything he wouldn't need to get rid of any waste material.

Personally I like these sort of stories. I want to believe them to be true. Yoga tells us about prana and Chinese medicine has the 'energy flow' of Qi. Perhaps if we used these properly we too wouldn't need food or drink. Or maybe this is simply another trickster.

You can read more info on Wikipedia about Inedia (the art of living without food) and Prahlad Jani.

Anyone fancy a veggie-burger? Or shall we breathe in a good helping of prana instead?
Posted by Mike Perry at 10:17