The story which follows, from Suzie, gives a warning about the Cosmic Boomerang, well that's what it's called in this tale. I guess most would refer to it as karma, though in this instance it has a slight twist. 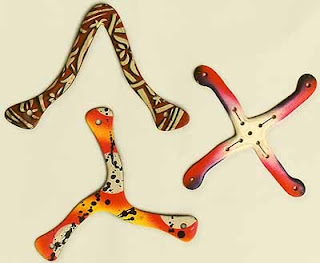 "You have mentioned Karma in several of your posts and I thought I would give you this story about a friend of mine. She doesn't call it Karma but prefers to refer to it as the Cosmic Boomerang. She says that just as the boomerang comes back to the thrower so does everything we say and do.

Rebecca told me that on quite a few occasions when people have maligned or tried to hurt her they have experienced physical accidents.

An example recently was when a woman who worked with Rebecca started to spread rumours and say nasty things about her to other staff. She then started to do the same thing within earshot.

Rebecca didn't respond in any way and didn't accept the situation. She got on peaceably with her work and let the barbed comments float over her head as if they weren't for real.

When she does this Rebecca says that things usually sort themselves out, but in this instance they didn't.

The woman continued to bombard her with nasty comments and negativity and this finally got to her. When she got home one night she was in floods of tears, but still hadn't responded otherwise.

Instead of brooding Rebecca went into the quiet and sent the woman showers of love and kind thoughts. She did the same again before she went to bed.

The next morning at work the other woman arrived with one eye and her head bandaged. It seems she had had an accident with an aerosol can the night before. The Cosmic Boomerang had been at work."

Thank you Suzie for the above (I did edit a little).

I suppose the question is: Did Rebecca cause the accident with the aerosol can?

Surely 'showers of love a kind thoughts' wouldn't do this. In my experience if you don't retaliate and instead send out some form of positive thoughts you simply win the other person round.

In some instances though, perhaps the eye for an eye process comes into play - if whatever was aimed at you was something particularly awful.

I personally wouldn't like to think that any action I consciously took would ever harm anyone.

While we are pondering that I'll move on to another example about 'what we give out we get back'. This one actually made me smile.

A young friend was telling me how he and his wife, with their two small children, went out to lunch at a restaurant. By my own standards his children appeared to have misbehaved by running round the restaurant and looking out of a window next to another family.

They constantly banged a chair against the window, shouted and hit the windows and made the other diners uncomfortable. The husband of the family finally snapped and shouted across to my friend that he should control his children. An argument developed.

My friend is convinced he was the hurt party and the other guy was in the wrong. His children can do no wrong.

A few days after this conversation I saw him again and he had been to an open air music concert at the Eden Project near to where we live.

I asked him if he had a good time. He said it was alright but he had a family next to him who kept knocking into him and talking throughout the concert. He thought it was a bit much as he had paid good money to enjoy the concert. I bit my tongue but wanted to say, "As did that other family in the restaurant. They had paid good money to enjoy their meal."

Call it whatever we want: Karma, Cosmic Boomerang or anything else but it definitely pays to watch over what we say, think or do.