The Mystery Of The 3D And Other Corn Circles 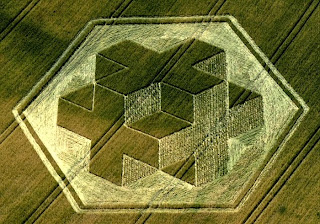 Crop circles are always controversial. Are they genuine or faked? Two men, Doug Bower and Dave Chorley, claim they have created 200 crop circles around the Warminster area in England. They have even told of their techniques.

So, yes, some are fakes but some crop circles cannot be accounted for. Here's something from Cheryl Hopkins which gives a positive slant to the debate. See what you think.

"Last week, a lady came to my meditation group to give a talk on Wiltshire crop circles and turned up with the expert himself, Fred Rusher, who had just arrived in the UK from Arizona to study this year's phenomenal geometric circles.

Fred has been studying these shapes since they first appeared in modern times (though his research has found that the first crop circle was chronicled in the 1500s).

He showed a video of himself and colleagues demonstrating a possible natural theory as to how these circles form.

Fred sprinkled sand on a flat square board then played high frequency sounds at it, making the sand whirl around and form various geometrical shapes. The shape changed with the sound frequency.

Particularly interesting was that Fred linked everything to God or whatever you call him. He said the messages in the crop circles are from the Divine creator and in this latest crop circle are three distinctive crosses (see photo at top of post).

There is more to the universe than scientists want is to believe but, fortunately, the truth is coming out."

It is interesting that crop circles are getting more and more intricate almost as if to say: 'look these can't possibly have been made overnight by men with planks of wood and some string.'

One of the latest (July 2010) around the Warminster area is pictured at the top of this post and has a 3D effect. The picture on the right shows what is believed to have been the first three dimensional crop circle from July 2006. What is the message, if any, which needs to be in 3D?

If we accept that some crop circles are made by man how can we distinguish which are definitely fake and those that are perhaps genuine? Dr. William Levengood from the University of Michigan has an explanation.

Dr Levengood claims that the plants, in genuine crop circles, undergo changes and this includes a swelling of the nodes (knuckle like joints on the stems) and says that this cannot be reproduced by a hoaxer.

His actual explanation for crop circles is that they are caused by unstable vortices of ions originating in the atmosphere, which reach the ground in a similar way to lightening. In that moment a burst of heat makes the plant nodes swell up while the crops are whirled round and laid flat.

There are dozens of theories about how corn circles are created, UFOs, ley lines, hoaxers etc. etc., but many reckon that as 2012 approaches they will become more numerous and more intricate. Perhaps, one day, as with many other mysteries, we will discover their full meaning and significance.