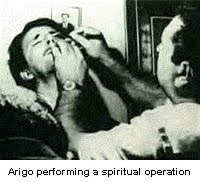 Psychic surgeons are often written off as fakes but there is one who may have just been genuine. He was known by the name of Arigo, though his real name was Jose Pedro de Freitas and he was from Brazil.

In the late 1950s, at the height of his fame, he was treating up to 200 people a day using only a pair of nail scissors and rusty penknife to perform operations. While doing so he remained in a trance like state. He never used antiseptics or anaesthetics. It is said that, when he was once shown a film of himself operating, he fainted.

Arigo was born in 1918 and the translation for this nickname is 'country bumpkin'. As this suggests he was far from being an educated man and had no known medical knowledge.

As a young man he was beset with headaches, hallucinations and vivid, strange dreams. A local spiritualist told him that these were caused by a spirit who was endeavouring to work through him. This idea rang true with Arigo and he became convinced that he was possessed by a German physicist called Dr Fritz who had died during the first world war. He believed that the doctor's spirit could only find peace by operating though him to help the sick.

There are many eyewitnesses who are convinced that Arigo was a genuine psychic surgeon, one of these was Dr Andrija Puharich. He has written, "These people step up - they are all sick. One had a big goitre. Arigo just picked up the paring knife, cut it open, popped the goitre out, slapped it in her hand, wiped the opening with a piece of dirty cotton and off she went. It hardly bled at all." He also witnessed an eye operation carried out in a similar way. Arigo acted in a brusque manner and spoke with a German accent throughout.

It appears that the operations carried out rarely caused pain and hardly bled at all after any incisions were made.

Arigo also gave out 'prescriptions' often for unlikely or obsolete medicines and in strange combinations. Allegedly his cures, with these, extended from cysts to virulent cancer.

He treated anyone, rich or poor, and did not want payment.

As can be expected the Brazilian authorities weren't too happy about an untrained surgeon - psychic or not - operating without a licence. He was consequently charged with the 'illegal practice of medicine' and sentenced to 16 months in prison. However, before he was due to be locked up, President Juscelino Kubitschek pardoned him.

In 1964 he was again sentenced for illegal practice and found himself under lock and key.

An appeal judge, a Filippe Immesi, went to watch Arigo operate after he had been released. He saw him operate with a pair of nail scissors on a woman half blinded by cataracts.

The judge described what he had viewed, "I saw him pick up a pair of nail scissors. He wiped them on his shirt and used no disinfectant. I saw him then cut straight into the cornea of the patients eye. She did not flinch, although perfectly conscious. The cataract was out in seconds. Arigo said a prayer and a few drops of liquid appeared on the cotton in his hand. He wiped the women's eye with it and she was cured."

Nothing fraudulent was ever proven against Arigo. His ability in making diagnosis was tested against X-ray, electrocardiogram and so on.

At the beginning of January 1971 he told friends that he would soon come to a violent end. He was killed in a car accident on January 11th and 20,000 people turned up to mourn him at his funeral.