Bizarre Stories In The Media Today

Celeb Coincidence
A well known celebrity was asked how she met her new boyfriend.

"It was an amazing coincidence," she answered, "We met in St Moritz. His wife and my husband broke their legs on the same day."Three bizarre stories seen in the media.

A Magical Reason
Incredibly the following is a true reason, given by a woman called Doreen, as to why she had to be absent from her £56,000 a year job with a council in London.

Doreen explained, "Sorry I can't come to work today as someone in Nigeria has put a spell on me." She went on to say that she was under the influence of an African witch doctor. This has meant she has only been able to work for eight days out of the past eighteen months.

Unlucky Numbers
I recently wrote a post about how some numbers are lucky and some aren't. This is what ex-corporal 22488913 had to add to the debate:

"I might be the only member of the Armed Forces who tried to have his number changed.

In 1951, I found myself in Aldershot (army camp) with a lorry load of bewildered 18 year olds for National Service.

We were inducted that afternoon - kit, haircuts and a dubious meal of kippers and jam sandwich - and settled down in our 26 bed barrack room.

The following day a corporal gave us each a small brown envelope, a single sheet of writing paper and a postage stamp and ordered us to write home saying we had arrived safely. That first letter gave our address and our new Army number.

I was the first to receive a reply, from my mum, obviously written at speed: 'Dear David, At all costs, you must see somebody in the Army and get your number changed. If you don't I intend to ask the War Office for another number for you at once. I mean it, Mum.' 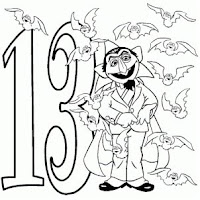 The cause of the upset was my 'last three' 913 - the dreaded 13 and the 9 meaning the same number if the three digits were added together.

My Army career was cursed from the outset. I did visit the orderly room where my timid request caused apoplexy all round, and I copped two days jankers for insubordination and began a long association with potato peeling.

My mother did pursue the matter and got a nice letter back from a 2nd lieutenant at the War Office but no new number.

I finished up in Tel-el-Kabir in the Egyptian desert for 15 months, in what was considered the worst posting in the Army."