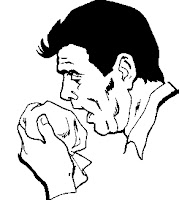 As it's Sunday I'm a bit off subject again. This is a short, mild rant as I've felt annoyed recently at the negative messages being regurgitated by the main stream media in general.

A typical headline in the newspaper said Ready Your Body, okay not too much wrong there, but it was the lengthy sub heading which followed that got my goat:

Winter is coming - and with it a range of health problems. From the mild sniffles to a fully fledged flu, this can be a most disruptive season.

So the bloke that wrote this claptrap is telling us that we are all going to have health problems and a disruptive winter - thanks!

The thing is that when we are told stuff like this over and over it can become almost a self fulfilling reality. We can easily come to accept that winter will bring us flu, sneezes and other diseases - but this doesn't have to be true. We can stay healthy. Just as we can survive the recession and other media horror stories.

A flu treatment on a television advertisement started off: 'When you get the flu you'll need ...'. Not even an 'if' but a definite 'when'.

I don't know about you but I refuse to accept these sort of headlines and immediately try to picture myself as healthy and having fun.

We are often told about how important it is to be positive in what we think and visualise. I think it's also equally important that we don't start to accept things we read or hear in the media, or from other people, without a second thought. This applies to all aspects of life, not just health.

If we do then atishoo, atishoo! We all fall down!

But we'll all still be standing - right?

Email ThisBlogThis!Share to TwitterShare to FacebookShare to Pinterest
Labels: Problem Solving, self improvement, Thought Of The Day