A Feeling Which Led To A Meeting With Bono 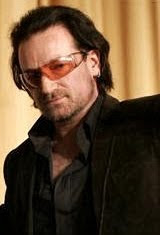 Today's coincidence is from Becky and is about a meeting with Bono ... but there is more than just this to the story ...

In October 1997, as I was driving to meet my girlfriends for dinner, I had a thought flash through my mind, "I'm going to meet Bono".

I actually was going to see Bono and the band in Toronto but the feeling the thought produced was more of a knowing. Excited by this thought and feeling I blurted out to my friends that I was going to see U2 and I was pretty sure I was going to meet Bono. With that statement came the giggles and, "OK, sure you are."

The following day or so after my initial thought / feeling I received another. This time I was with my husband and again I blurted out, "We're going to meet Bono!"

He raised his eyebrow and said, "Yea, right."
Then I realised that I had blurted out this fantastic thought / feeling to my friends and husband but how in the world was this going to happen? What if I was wrong?

I began thinking logically about how one might meet Bono - along with maybe thirty thousand other people. I then remembered I had read a book U2: At the End of the World

. This contained great information on how the band like to travel and where they stay when on tour (thank you Bill Flanagan author).

Fast forward to the day of the concert: I don't mention or bring up meeting Bono. I'm enjoying the day, being happy to be away from the kids and enjoying the fans in the Hard Rock Cafe waiting for the start of the show.

The show starts ... the show ends ... and now time is running out on my thought / feeling about meeting Bono.

I suggest to my concert going mates that we should head down to a five star hotel in town so we can meet the band. Two of the party of five agreed. We were on holiday and there was no need to go to bed while in a big city.

My husband, myself and his sister hailed a cab and headed out to town.

When we arrived at the hotel it appeared to be a ghost town. We walked in and there was barely a soul in the lobby, which seemed odd. We approached the bar to get a drink only to find the doors locked. There were people inside but the doors were locked. Again odd.

Feeling like rejects we headed for the door when, out of the blue, the bell boy approached us and said, "Hey, there's a little bar half a block from here. You'll be able to get a cocktail there.

While standing there quibbling about whether or not we should move onto the next establishment I was not feeling so confident in my meeting Bono. I was convinced that Bono and the band were behind those locked doors!

Not being able to convince anyone we should stay waiting for Bono, we leave. We take the advice of the bell boy and move on down the block.

We walk into this quaint bar, my husband goes to the bar to get our drinks and in my right ear I hear a voice, "He's here."

I'm mystified because it was not my sister-in-law who made the announcement. She was standing to my left. Cue the twilight-zone music!

Freaked out a little as I'm looking at my sister-in-law and looking for the voice, the door opens and in comes Bono! Cue time standing still music.

In that moment it was as if time stood still. That thought and feeling had turned into a reality.

It was that moment, thirteen years ago, that sparked my curiosity in all that may exist and does exist. It was that thought, that feeling, those synchronistic events that have changed my life. All the pieces came together at the right time.

I cherish my autographed napkin to this day!

Footnote: Becky also sent me a follow up to the above story. She was watching a U2 video of Bono singing She's A Mystery Girl last week on YouTube. When it finished a list of other videos came up. She clicked on the top video and it was the one below.

The video tells of how Bono wrote She's A Mystery Girl but also, more importantly, how Roy Orbison 'materialised' at his door. Becky says she was 'gob smacked' by the video. She materialised Bono and Bono materialised Roy Orbison!