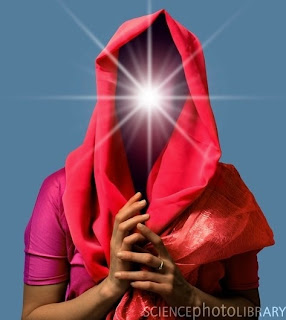 Psychic powers exist. Nope, that's not just my opinion or that of quite a few 67 Not Out readers. It's also the opinion of a Professor Daryl Bem who has carried out experiments to back this up. His findings have been published in the New Scientist magazine.

In one of his experiments the Professor's students were shown a list of words to memorise. Later they were asked to recall as many of these as they could and finally were given a random selection of the words to type out.

Obviously the students were better at remembering some words than others.

But here's the psychic bit. They tended to remember the words they would later be asked to type. This suggested a future event had affected their ability to remember.

In this experiment the position of the picture was randomly allotted by a computer after the student had made their choice of which curtain to choose. This suggested that the students were actually influencing future events.

All in all Professor Bem, of Cornell University in New York City, carried out nine separate experiments with more than 1000 volunteer students. All but one resulted in favour of psychic power.

The Professor reckons that the odds against the combined result being down to chance, or a statistical fluke, are 74 billion to one. He said that, 'the science world should open its mind to the possibility of the paranormal.'

As for the New Scientist publication, they commented that, 'the proof of the pudding will be in whether other scientists can repeat Professor Bem's success.'

What I have read about the experiments probably won't convince many scientists or non believers but it's good to see a Professor taking the subject seriously. It would be great if other scientists followed suit. If we all started believing in psychic powers it would change the world and, yes, this would be for both good and the bad. Opposites unfortunately often go hand-in-hand. It will no doubt happen when the time is right.

Two psychic healers meet in the street, "You're fine - how am I?"