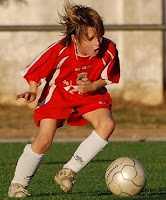 My thanks to JC again for the following coincidence story. It's about asking for guidance from a 'higher level' and getting the request answered. It's also about trust or faith or belief.


On Saturday afternoon, November 21st, I planned to attend a football match in which two of my former students were playing (I'm a sports teacher at a Junior School). I told their families I would meet them before the game so that that we could watch the game together.

I left my home early as I wasn't too sure where the football ground actually was, it was about a 60 mile trip. As I joined the main A road, a car pulled out directly in front of me from a side turning. The driver didn't look in my direction or slow down. If I hadn't of reacted quickly, I would have collided with him.

The 'idiot' then settled down in front of me driving at a slow 30 mile-per-hour crawl in a 50 mph area. Cars began piling up behind me, but the road had double white lines so there was no way I could overtake him.

He eventually pulled off and I started driving faster to make up for lost time. I then remembered I was low on petrol, so I stopped at the next service station. I filled up and went into the shop to pay but the man in front couldn't get his credit card to work and it took, what seemed, ages before the transaction went through.

Eventually I got moving, but was frustrated at the time wasted.

Hurrying, I reached a roundabout roughly three-quarters of the way to my destination. I slowed down for a car coming from my right, as it had right of way. I immediately recognized the car as belonging to one the families I was planning to meet up with.

He didn't notice it was me and carried on along the road ahead. However, his son did see me and started to wave from the back window. This simplified my jouney as all I had to do was follow the car in front. My concern about finding the football ground vanished and we got there in good time.

In the end, therefore, everything worked out perfectly and the slow driver and the man with the credit card problem all helped to make it so.

One of the strange things is that before leaving home I asked the 'great unknown' to help me find the football ground without any difficulty. If I had put trust in this from the very start the delays on route wouldn't have frustrated and annoyed me. I should have realised that this was all part of the plan.

Further Reading:
How To Get A Car Parking Space Using The Power Of Coincidence
Clean Sweep With Five New Brooms Coincidence
The Law Of Attraction Powered By Visualisation