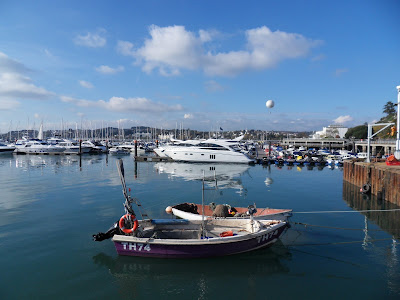 As part of our travel recently we headed for the coastal town of Torquay. Up until then I had been bemoaning the fact that our break had not produced any coincidences.

This changed a little once in Torquay, nothing dramatic, but there was a succession of small coincidences. As we drove towards the town I took the wrong direction so by 'chance' we came across a road called Hellevoetsluis Way.

Now, to say the least, Hellevoetsluis is an unusual name for an English road or place. The reason being that it is a coastal town in Holland (Netherlands). I know this because I visited there when I was fifteen and that was the very first time I had travelled outside of England.

I remember that it was a school visit on a pupil exchange programme. On one visit to Hellevoetsluis we met the Mayor and he gave us English students a silver spoon (photo right) - which I still have and is in a display cabinet in our living room.

If I hadn't have gone in the wrong direction, on my way to Torquay, I wouldn't have been reminded of my visit to Holland. I feel that some coincidences occur to get us thinking about certain things, which seeing the name Hellevoetsluis certainly did. Most of it though I'll keep to myself! I'll just say that the Dutch student I exchanged visits with was a girl. I wonder what happened to Connie Booy and her best friend Bertie?

After my wife and I found our place to stay overnight we walked to the sea front. It was a glorious sunny day, warm for late October, so we sat outside a cafe overlooking the Marina and had a coffee while watching the world go by. And who did we see walk by? A neighbour who lives in the same road as we do. So a second coincidence. Neither of us knew that the other would have been anywhere near Torquay.

The third coincidence of the day was also something small but somehow meaningful to us. That evening as we found somewhere to eat we were talking about our 14 week old grandson - as we often do! And there in front of us the car number plate spelt out SAM - our grandson is called Samuel. It was like a sign that he was okay, well to my wife and I it was.

Okay, so these three coincidences aren't exactly mind blowing. I'd have liked something more exciting to write but they showed that whoever dishes out our supply hadn't forgotten about us completely. That was reassuring.