Woodhenge The Stonehenge Made Of Wood 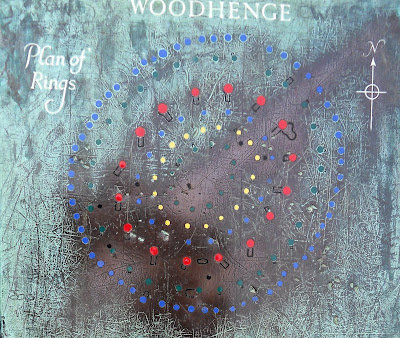 Yesterday I wrote about my visit to Stonehenge and published various photos. I also visited Woodhenge which is about 2.5 miles from Stonehenge as the crow flies.

Nothing very glamorous about Woodhenge but it indicates how some circles were initially made of wood - thus the carpentry style joints in the Stonehenge stones (see yesterday's post). 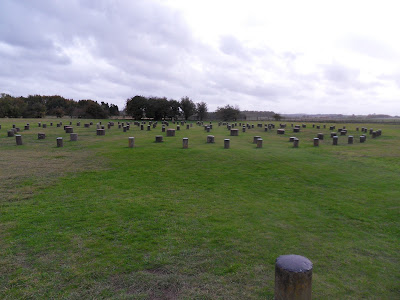 Woodhenge is so called, as the name suggests, because it was a wooden structure similar to Stonehenge and is believed to have been set up during the Bronze age, maybe for religious rituals.

The wood posts are now long gone but concrete posts have been placed to mark the position of the original timbers. These concrete posts show the six concentric rings and are marked with different colours.

The rings are in fact oval - more about this in a moment - with the long axis pointing to the rising sun on Midsummer Day. There was a burial site near the centre of the rings and a bank, with a ditch, originally surrounded the monument - which was entered by a causeway on the North East.

There are other stone and similar rings in the UK, Ireland and northern France. Most people think of these as being round - circles in other words - but many are ellipses, flattened circles or even egg shaped.

Various conclusions have been drawn about these oval shaped rings. One is that the people of Britain must have been capable of working out geometry some 2000 years before Pythagoras.

The earliest rings are generally circular, obviously easier to construct with perhaps just a middle peg and some form of rope. The other rounded shapes are thought of as being later and required a greater knowledge of mathematics. As to why they went to the trouble of making rings that weren't circular is unknown, the reasons lost in the midst of time.

It also raises the question as to how this information or knowledge was passed on throughout prehistoric Britain.

As with all of these rings or circles - Stonehenge, Woodhenge and others - as to why they were constructed is unknown - though there are many theories.