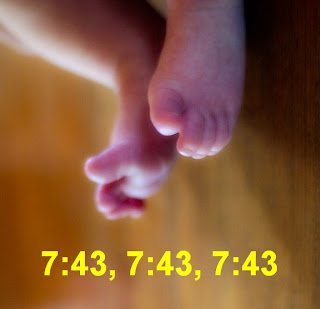 Police Constable Matt Rigby and his partner Lowry Dairsley, from Salford, Greater Manchester, were expecting their third child, nothing unusual there. But then a coincidence happened where the odds of it actually happening were something like 300 million to one.

The couple's first two daughters were both born at the same time of 7:43, Ella in October 2005 and Evie in 2007.
Surely their third child wouldn't also be born at 7:43. Lowry takes up the story:

"When we found out I was pregnant with Harrison we joked it would be incredible if the same happened. When I went into hospital at 5pm we forgot about it and concentrated on the labour.

At 6.30am I felt the urge to push and when we next looked it was 7.41am. I was asked to wait for the next contraction by the midwife before she delivered him two minutes later. The doctors and midwives were speechless."

Matt added, "I looked at the clock it was 7.43. We couldn't believe the coincidence."

Matt was so impressed he has had a tattoo with the words 'Seven Forty Three' on his arm. The 20th of January 2011 was, after all, a 300 million to one special day. (The times of the three births have been verified with hospital records.)