How Leaf Cutting Ants Look After Their Old 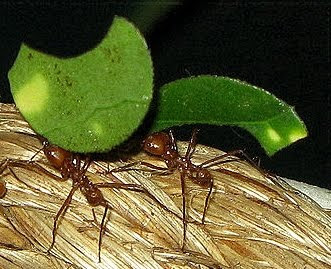 Ants may perhaps not be one of our favourite creatures but they can teach us a lesson or two about society and how we are all interdependent upon each other. Take the Central American leaf-cutter ants for example.

Leaf cutting is no easy job for something so small. Their jaws have to vibrate a thousand times a second to slice through the pieces of leaf they require to grow a special fungus.

The leaf-cutter ants have a 'V' shaped blade between their teeth but as time passes this, like their teeth, becomes blunt as old age catches up with them. But, never fear, these older ants aren't dumped, ignored and pushed aside into the equivalent of an ant nursing home.

No, they become carriers instead of chompers. The young vigorous ants continue with their cutting and the older ants are given a new role in life as leaf carriers. In other words they respect age and their society flourishes because of this.

All of this was recently discovered by a study made by US scientists. They have a well ordered society - the ants that is, not the scientists - and workers each have specific tasks or jobs to benefit the whole colony.

The team leader Dr Robert Schofield - of the scientists, not the ants - put it this way, "The study demonstrates an advantage of social living that we are familiar with. Humans that no longer do certain tasks can still make very worthwhile contributions to society."

I agree with the sentiment that Dr Schofield puts forward but unfortunately much of our human society does no accept that older people have anything to contribute.

When my mother was in a Nursing Home - there was sadly no alternative because of her health - my wife and/or I would visit her virtually every day. In doing so we had to sign in and sign out to comply with health and safety regulations. We would often go weeks without seeing another signature in the book other than our own. It was heart breaking that most of the residents had been forgotten by the world at large.

Makes you think, doesn't it, how unfair and uncaring we are to sections of our society?

Further Reading:
The Cat Who Just Wouldn't Go Away
Goats In Trees Coincidence
The Psychic Power Of Dogs