Rosa Celeste: Dante and Beatrice gaze upon the highest Heaven 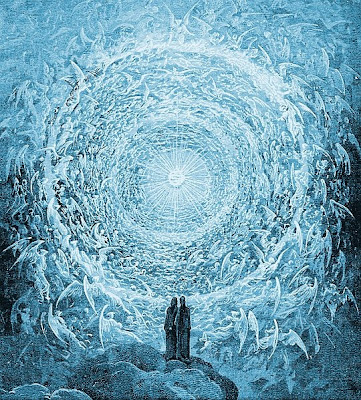 "Heaven, we are informed by the great teachers and masters, does indeed exist, but it exists in the here and now, not in some other place some other time.This leaves us with the conclusion that it must occupy the same place as this earth.

And what do the dead in Heaven wear? Clothes - fortunately! To quote the good doctor, "The inhabitants of Heaven wear clothes. It is noteworthy that period costume appears to be the mode more than modern gear. This again suggests that what we call Heaven is, in some mysterious way, furnished by our own consciousness ..."

Did this answer my question: "Where is Heaven?" Probably not but I've always felt that there are different 'layers' surrounding the earth getting finer and finer. The level we reach after death depends on our personal level of attainment. If we are none too fine, back we come to our earth level for another lesson. This way I can believe both in Heaven and reincarnation.

Heaven is not a place, and it is not a time. Heaven is being perfect.
Richard Bach, in Jonathan Livingston Seagull

Nothing is further than Earth from Heaven: nothing is nearer than Heaven to Earth.
Augustus William Hare and Julius Charles Hare, Guesses at Truth

If our Creator has so bountifully provided for our existence here, which is but momentary, and for our temporal wants, which will soon be forgotten, how much more must He have done for our enjoyment in the everlasting world?
Hosea Ballou

Heaven, as conventionally conceived, is a place so inane, so dull, so useless, so miserable, that nobody has ever ventured to describe a whole day in heaven, though plenty of people have described a day at the seaside.
George Bernard Shaw, A Treatise On Parents And Children

He who seldom thinks of heaven is not likely to get thither; as the only way to hit the mark is to keep the eye fixed upon it.
Bishop Horne, Aphorisms and Opinions of Dr. George Horne

The number of levels in Heaven is the number of verses in the Qur'an. Thus, when a reciter of the Qur'an enters into Heaven, it will be said to him: 'Go up one level for every verse that you can recite.' Thus, no one will be in a higher level than the one who has memorized the entire Qur'an.
Muhammad

Heaven will be no heaven to me if I do not meet my wife there.
Andrew Jackson

Name something you like. I bet it's not in heaven. Sex? Sorry, lust is a sin. Can't have it. Your career? Nope. There's no money in heaven; nobody needs to work. Besides, as far as I can tell from studying the scriptures, all you do in heaven is pretty much just sit around all day and praise the Lord. I don't know about you, but I think that after the first, oh, I don't know, 50,000,000 years of that I'd start to get a little bored.
Rick Reynolds