The Monster Of The Lake Surfaces

Look out Loch Ness and other such monsters there's a new boy in town. This one is called the Bowness Monster, or those a little more familiar call him - or perhaps her - Winnie.

The Bowness Monster - yes, that's Winnie in the photo above - was recently spotted in Lake Windermere in England's Lake District by Tom Pickles and his companion Sarah Harrington. They were kayaking on the lake and up popped the monster. Luckily they had their trusty camera phone to secure the occasion for the world.

Tom said, "I thought it was a dog. Then I realised it was much bigger and moving really quickly. Each hump was moving in a rippling motion and was swimming fast. I could tell it was bigger underneath from the huge shadow around it.

It's skin was like a seal's but it's shape was abnormal - it's not like any animal I've ever seen before, We saw it for about 20 seconds. It was petrifying."

But this isn't the first time the monster has been spotted, there he is again back in 2007 in the picture below. 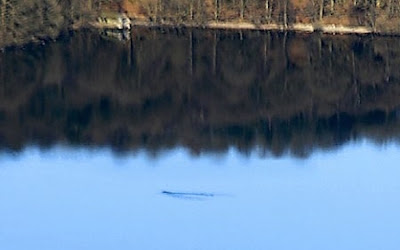 Linden Adams said, "It just came out of the blue, The water was incredibly peaceful and then this huge thing appeared, diving and thrashing around. It appeared to be 50ft long. I snatched the binoculars from my wife and gasped when I got a better look. I could see this huge dark thing moving in the water. It had a head like a labrador, only much, much bigger."

But then I came across another sighting of the Lake Windermere monster from the 18th of September 2006 as per the YouTube video below. This time it was spotted by a University Professor.

I like to think that there are monsters in the depths of lakes hidden away for thousand of years. I just wish we could get a good clear photo. Of course, as I have written before, there is a monster near where I live in Cornwall - see The Cornish Mystery Of Morgawr Monster Of The Sea. Ours is a bit special though, as he roams the seas off the coast. Not for him the confines of a lake.