Mystery Of The Cannibals Of Cheddar Caves

Bowl made from a human skull - Cheddar Caves 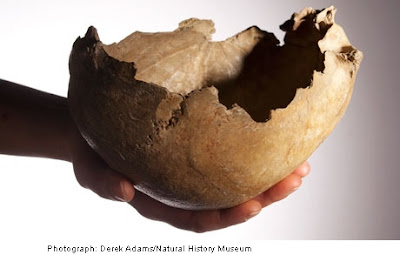 Gosh it was cold 24,000 years ago, so cold that any remaining residents of Britain headed south for warmer climes. They probably made their way to northern Spain or France - at the time Britain wasn't an island so the journey could be made on foot.

Though we don't know why, about 14,700 years ago earth started getting warmer, and quite quickly. In three years it is believed that temperatures soared by 6-7 degrees Celsius (about 42.5 degrees Fahrenheit).

The Ice Age was over and Homo Sapiens headed back to England, and in particular to the Cheddar Gorge area in Somerset, England. They made their home in the caves bringing with them their rituals and religious beliefs.

Yes, there was a form of religion back then and this seems to be inbuilt within us humans. These early British settlers were hunters and farmers but their beliefs were different to religion nowadays.

Human sacrifices were made to win the favour of the gods and to ensure a period of abundance for the remaining people. It is believed that the victim of the sacrifice, often a young woman, would be first drugged with a blend of hemlock and and hallucinatory herbs.

The killing would still have been unpleasant, to say the least, probably with the use of a stone dagger being plunged into her chest. But this wasn't the end of the ritual.

The victim's body would then have been butchered. Every part was put to use and most of the flesh was eaten. It appears that our ancestors were cannibals and this gene could well remain with us today.

Professor Chris Stringer of the Natural History Museum said, "These people were processing the flesh of humans with exactly the same expertise that they used to process the flesh of animals. They stripped every bit of food they could get from those bones."

The skull was particularly prized and after being boiled for food was then made into a crude bowl.

The bowl would have been added to the store of ritual equipment, perhaps for drinking blood at particular ceremonies. Three such skulls have been found in Cheddar caves.

Sites of antiquity in Germany and France also have evidence of human bones being butchered.

As to whether cannibalism was carried out for ritual purposes is in debate. Dr Silvia Bello, again of the Natural History Museum, said, "These were very difficult times and it is still quite possible people ate each other because there simply wasn't anything else to eat."

It's interesting that there was another big freeze two thousand years after the Cheddar man lived in the Cheddar caves. These tribes would have had to have retreated once more to France and Spain. Or maybe they simply died of the severe cold that came upon earth very quickly. Britain was inhospitable to life for a further thousand years.

Does any of this have any significance today? Perhaps in a few ways:

Man has an instinct to worship gods and perform rituals, going back many thousands of years. Our natural state therefore could be considered spiritual, we 'know' there is something more to life.

Cannibalism and eating human flesh could well be within us. Think, for example, of the Andes air crash in 1972 when survivors ate the flesh of those who had been killed in the accident. Or was this just a survival instinct?

Throughout history there have been dramatic changes in climate, often happening within a short time frame.

Further Reading:
The Rites Of Dionysus The God Of Wine
The Journey Of Immortality
The World's Oldest Working Clock