The Hypnotic Way To The Wounds Of Stigmata

The Ecstasy of Saint Catherine 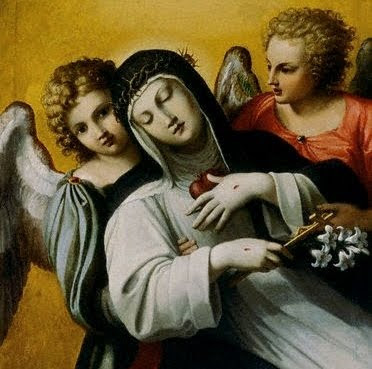 Last week I wrote a post Stigmata And The Copycat Wounds Of Jesus.

Today I plucked a book from my office shelves at random and it was called ESP - The Sixth Sense. As the title suggests this was published in the mid 1970s when ESP was quite fashionable.

I opened up the book and it settled on a page about stigmata. It gave some examples which I mentioned in my post and came to a general conclusion that some stigmata are perfectly genuine.

One of the instances they quoted was the work of a Dr. Alfred Lechler - though further research has shown me that his first name is sometimes quoted also as Adolph. As his work was published in the late 1930s this could be the reason for the name difference.

Dr.Lechler investigated, amongst others, the stigmata of Teresa Neumann - mentioned in my post - and gave details of this in his book Das Ratsel von Konnersreuth.

To back up his findings Lechler carried out an experiment on one of his patients, a young Austrian girl called Elizabeth. She had been greatly impressed after seeing a film of Jesus on the cross and his suffering. So much so she had sympathetic pains in her hands and feet.

He gave Elizabeth the hypnotic suggestion that overnight, wounds would develop at the site of her pains - and they did. He was also able to 'persuade' her to produce tears of blood and the marks of the crown of thorns.

Dr.Lechler filmed the wounds on Elizabeth before causing them to heal - again by hypnotic suggestion. I can, however, find no trace of this film on the Internet.

Other forms, similar to stigmata, have also been produced by hypnosis.

One in particular was a sailor who, under hypnosis, was told he was about to be touched by a red hot poker. In fact his arm was touched by the hypnotists finger. Within a few hours a large watery blister had formed.

I think my conclusion of stigmata remains the same as in my first post on the subject: If belief is taken to emotional excess this can produce a dramatic effect on the body. Some stigmata could well be genuine.

Further Reading:Stigmata And The Copycat Wounds Of Jesus

Email ThisBlogThis!Share to TwitterShare to FacebookShare to Pinterest
Labels: Stigmata