Stigmata And The Copycat Wounds Of Jesus 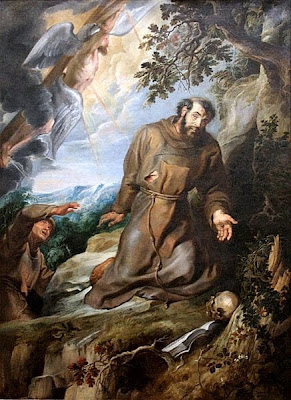 Stigmata are the wounds or marks on the body - that some people appear to have - which correspond to the injuries Jesus suffered on the cross. Stigmatics may have these on their hands, feet, side and some also have bruise like marks on their shoulders caused by 'carrying the cross'.

Stigmata are no doubt sometimes fake but there have been instances, throughout history, where perhaps they may be genuine.

The first instance of Stigmata is appropriately in the Bible. In Galatians 6:17 St. Paul writes, "I bear in my body the marks of the Lord Jesus." But, as with a lots of the Bible, this could possibly have a different interpretation.

St. Francis is said to have had a vision of an angel on the cross. This affected him so much his wrists and feet became as if pierced by nails. Thomas of Celano in his First Life of St.Francis writes about how St.Francis had another wound on his body, "... his right side had a large wound as if it had been pierced with a spear, and it often bled so that his tunic and trousers were soaked with his sacred blood."

Teresa Neumann was born in Germany and had a serious accident to her back in 1918, after which she became bedridden. However, after praying to St. Teresa of Lisieux in 1925, she recovered from her injury.

The following year she went into a trance and wounds formed on her hands, feet and side. They are said to have bled profusely as did her forehead corresponding with Jesus' Crown of Thorns. Crowds flocked to see her as this continued to happen each week.

As for Padre Pio de Pietralcini, he was an Italian Capuchin friar. He is said to have received his stigmata in 1915, after which he also had great powers of clairvoyance and precognition. Again people flocked to see him. His stigmata continued for over 50 years.

Though stigmata is normally associated with Roman Catholics they view the subject with caution.

But can this really happen?

The feeling seems to be that - if not caused by God or mystical means - they are created by some form of auto-suggestion. If belief is taken to emotional excess this can have a dramatic effect on the body. Couple this with religious fervour and anything is possible.

Further Reading:
How The Virgin Mary Had A Child But Remained A Virgin
The Most Wonderful Wonder Of The World
The Dangers Of Harry Potter And Wicca To Mankind